Narendra Modi should not be allowed into UK, demands survivor of Gujarat Massacre 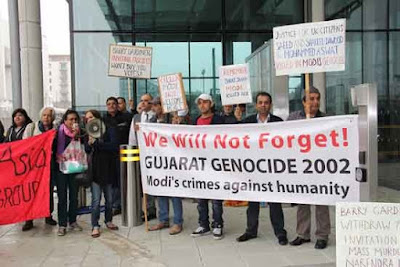 Modi should not be allowed into UK, demands survivor of Gujarat

London: The Gujarat riots were an embarrassing period in the history of mankind. 1000’s of Muslims were being murdered before their families. Many victims of 2002 riots faced violence from Hindu Extremist groups.

A British Muslim who survived the 2002 Gujarat riots and kin of three other British Muslims who were mercilessly murdered with over over 2,000 Muslims by Hindu mob, under the rule of the then CM Narendra Modi, frowned upon his proposed visit to the UK, , are demanding afresh for justice.

“Modi should not be allowed into the UK. I saw burning buildings. I saw mobs committing genocide. I saw dead bodies, I saw burnt bodies all around me. I experienced smells like never ever before. I was terrorised and left for dead”, Imran Dawood said while talking to The Muslim Mews.

“My family, neighbours were taken away from me and until now no justice has been delivered. And it sickens me now when I see the news on how killing of Muslims is still happening,” he added.

Imran was 18 when he was stabbed by the Hindu Extremists during the 2002 Gujarat riots.

He along with his uncles Saeed Dawood and Shakeel and their friend Mohammed Aswat were returning to Gujarat from Agra after an excursion when they were stopped by well-organised Hindu rioters.

The Hindus gheroed the jeep and inquired the occupants their religious identity, the tourists responded that they were British citizens and were Muslims.

The hired jeep driver was then dragged out of the vehicle and attacked with sticks and killed then and there.

After that, his body was thrown back into the vehicle and set on fire. In the interim, the British tourists were chased to a farm in close proximity.

Aswat were brutally murdered. Imran miraculously survived. Imran recalls Saeed and Shakeel pleading with the mob to spare all their lives but to no avail.

“Many words, thoughts and feelings come to mind as to when we first received the information about what had happened and even now the same feelings remain. We feel anguished, hurt and sadness. A father, husband, brother, son and friend to many were lost”, Aswat’s son, Suleman, told The Muslim News.

“The fact that Modi is due to come to the UK is extremely sad,” he said. “Will Modi be challenged when he comes to the UK on what happened? It is unlikely”, he asked.

Modi was CM of Gujarat during the riots. UK ended its boycott of Modi in October 2012 in spite of earlier quote from the leaked report of British High Commission in India according to which the pogroms in Gujarat in 2002,

“had all the hallmarks of ethnic cleansing and that reconciliation between Hindus and Muslims is impossible while the chief minister remains in power.”

The report further said, “far from being spontaneous” this massacre, “was planned, possibly months in advance, carried out by an extremist Hindu organisation with the support of the state government.”