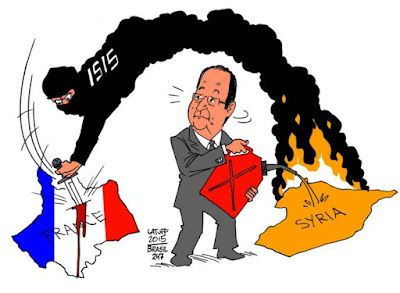 From Bloc Rouge ( Maoist Unification) on attacks in Paris Region

It was France who armed the worst reactionaries who claim to fight for Islam in Syria ! Let us don't forget the state propaganda led by the Socialist Party against Bashar Al Assad, comprador bourgeois serving Russian and Chinese imperialists.

France has armed the Free Syrian Army to overthrow him. The FSA was a breeding ground of the worst religious reactionaries, including Al Nusra Front, one of the worst executioner of the Syrian people. These weapons have ended up in the hands of ISIS with those recovered in Iraq mainly provided by the United States and in Libya by France !