In the wake of widespread prohibition movement in Tamil Nadu, Kovan wrote, composed and preformed songs criticizing government run alcohol shops and the governments in power. Those songs came to the attention of officials sympathetic to the AIADMK led state government.

In late October, Kovan was arrested by TN Cyber Crime Police "under Sections 124-A (Sedition), 153 (Provoking riots), 505 (1) (b and c) (intent to cause fear and alarm to public against state and incitement).

His crime – to have written, performed and released on the internet, songs criticising the state government of Tamil Nadu and its Chief Minister J Jayalalithaa on the burning issue of Prohibition".[1]

The state government considers these songs derogatory, sedition and it is attempting to remove these songs from Youtube.

It is also trying to shut down the vinavu.com website supportive of the artist works.[4] Amnesty International India re iterated its call to repeal the archaic sedition law.

It stated that sedition laws is often used to curb the freedom of expression.

Sedition law was first created and used by the colonial British government against the Indian independence movement. 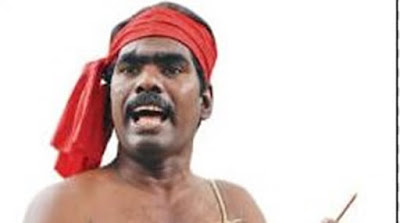