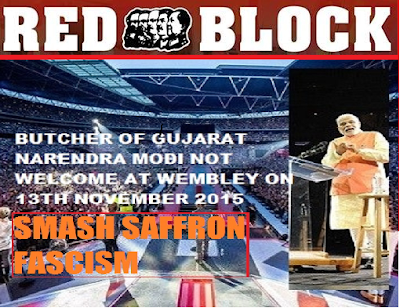 
The visit of Narendra Modi to the UK should be protested by all who stand for human rights and democracy.

Since coming to power in India eighteen months ago Modi's India has witnessed a increasing attack on Indian social and political rights and free thought.

We have seen the targetting by Hindu extremists and murder of secular free thinkers like MM Kalburgi and Govind Pansare since Narendra Modi has come to power.

We have also witnessed a rise in Hindu fundamentalist attacks on Dalits (untouchables) including recent murder by arson of two children in Faridabad town in Hayarana State.

Muslims have also been the subject of attack by Hindu Fundamentalists in Muzzaffarnagar in the state of Uttar Pradesh 40 muslims were killed in an organised attack by Hindu gangs and 40,000 people displaced from their homes.

Modi has politically polarised the people of India with the banning of Beef in States that have Muslim populations leading in Dadri to a Muslim being hanged for suspicion of having beef in his fridge.

India's War on the People Operation Green Hunt against the Adivasi (tribal people) has reached a new level of intensity with Indian Airforce attacking tribal villages.

The re-activation of the Salwa Judum vigilanties under different names in tribal areas killing people suspected of being Maoists is on the rise.

The attack against free thought in India since Modi came to power has been recognised by the literary and academic community who have returned prizes and awards to the Indian Government to protest the arrival of Narendra Modi's Saffron Fascism in India.

There is full spectrum resistance in India to this massive assault on the rights and intelligence of the Indian People and has members of the Red Block we applaud the leadership of the Communist Party of India (Maoist) who defends the Adivasi people against military assault.

The Communist Party of India (Maoist) also supports the struggle of the Dalit People through it people's organisations rectifying the mistakes of Brahminical Communism of the revisionists in India.

The India Goverment admits to arresting over 13,000 Maoists in India and regards the Maoists as the largest internal security threat - fearful that a united people led by Maoists will rise and finish off the Indian comprador capitalism of Narendra Modi and his global finance capitalist backers.

The Struggle in India is not just a struggle of the people of India but a global struggle has Indian Comprador Capitalism spans the world and has a large presence in London which is based on the exploitation of the working people of the Indian sub Continent.