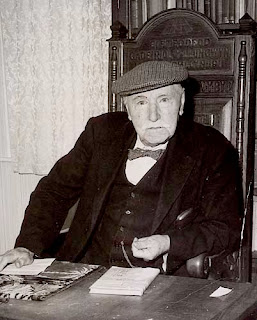 The voice of Niclas Y Glais a great  Welshman and Bard who opposed First World War and Imperialism.


And when you pray and pray I cannot listen,
Your silky hands, so steeped in blood, I dread,
From holy altar's, easeful shade I hasten
When on the upward steps I hear your tread.

You dress your mealy words in subtle clothing,
You bless the dogs of war with priestly cant,
I loathe you with an everlasting loathing,
Arch-hypocrite and royal sycophant.

Humanity in need can wait no longer,
And you like foolish mummer on bent knee –
The blood and fat of ox won't feed my hunger –
While untold corpses litter hill and lea.

Your paws are red with blood, you fleshy knave,
Who panting runs with beast of primal cave.


Thomas Evan Nicholas (6 October 1879 – 19 April 1971) also known as Niclas Y Glais one of the sonnets written while he was in Swansea and Brixton prisons for his anti-war activities.