France : Revolt of the suburbs: response to OCML-VP and "Les Matérialistes" 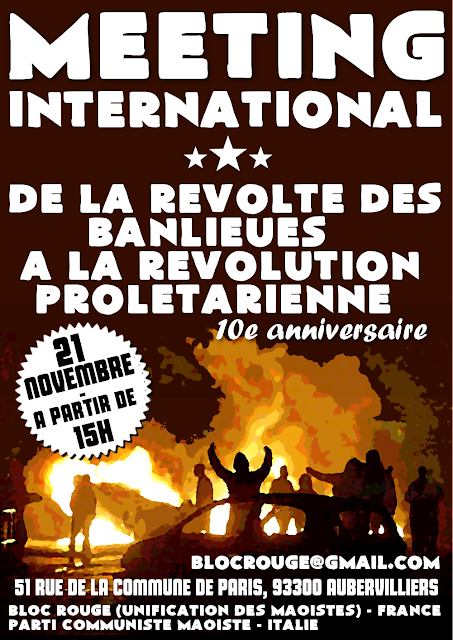 You can find Partisan Magazine's article here, the relevant part is "Revolts and riots are not revolution." You can find the piece by "Les Matérialistes" here.


Recently Bloc Rouge (Maoist Unification) has been criticized ideologically on the question of the suburban revolts almost simultaneously by two organizations: OCML-VP and Les Matérialistes (old website "Voie Lactée"). It seems important to answer these criticisms and the way they were brought for two reasons :

- to refute the falsehoods that can be found in both texts and clearly reaffirm our line on the question of the revolt of the suburbs and Protracted People's War.


Let's focus first on the criticism from the OCML-VP who appeared in an article in the latest issue of Partisan Magazine (you can view the entire article here). First on the form: the polemic is conducted through a magazine without informing us and the provocations are numerous: we note the quotation marks on "Maoists" and "our" that tends to give a patronizing tone, PCmF is qualified as anecdotal ... From there we have to raise the level to overcome the sterile debate that the OCML-VP wants to launch and proceed to the real ideological issues. We will not play with words, will not truncate quotes and we will concentrate on the substance of the matter: that of revolutionary strategy, the role of suburbs in it and the meaning of the revolt of suburbs for revolutionaries.


Firstly, the quotes are truncated and constructed from several sentences, in short, a risky and malicious craft which seeks to distort and erase the meaning of the discourse so targeted. It is ironic that an organization claiming to be Maoist makes use of this method: it was the typical method of Enver Hoxha to attack Mao distorting his words one by one in his book Imperialism and Revolution. We invite you to read the brochure in question, "The People's War in the imperialist countries" which is an outline drafted by the PCmF in 2008 on the issue of the preconditions of the People's War in France.


The OCML-VP would like us to believe that we confuse revolts (and not "riots" as their article asserts) and revolution, that we are blind to the qualitative leap that has to be made from one to the other. This accusation is ridiculous and baseless, and what OCML-VP is in fact criticizing is that we said loudly and clearly at that time that it was necessary for communists to go to the suburbs, to be on the side of the proletarian youth in revolt against the police and the bourgeois state, in short, to fully support the revolt ...


What OCML-VP seeks to attack it is position that the revolt of 2005 suburbs played a role of exposure : it showed the lack of work by so-called revolutionary in poor suburbs while showing that these suburbs have great capacity for revolt. And that is why we say that this revolt is part of the premises of the People's War in France: it is an essential element to be taken into account in the development of a revolutionary strategy in the French state.


The OCML-VP has always rejected the people's war strategy and the Leninist conception of the party. Thus in the 2000s, it is important to remember that the OCML-VP called on us to vote for the Trotskyist Lutte Ouvrière and previously it had advised voting for Mitterrand ! By postponing the revolutionary perspective indefinitely, the OCML-VP has systematically strayed into opportunist and reformist tendencies : it is what necessarily happens when you imagine the revolution as a remote "Grand Soir" cut off from the reality of today. The strategy of People's War breaks with this misconception of a distant insurgency following a peaceful buildup of strength to assert among other things the protracted character of the revolution and the need to carry it out with three instruments: the Party, the Front and the Red Army.


This rejection of People's War by the OCML-VP is pushed to its climax in the resolutions of their last conference (published in late November 2014 here: http://www.vp-partisan.org/article1375.html). In these resolutions on support for People's Wars in India and in the Philippines, OCML-VP speaks of "armed struggle with a revolutionary political program" to avoid the term Protracted People's War and deny the qualitative differences with simple revolutionary armed struggle, it denies the strategic aspect of the People's War developed by Mao Zedong: "Therefore support for revolutionary armed struggles in oppressed countries like the Philippines and India, which are armed struggles with a revolutionary political program, is a political line of demarcation between the organizations claiming communism. ". It is not support for the People's War in India and in the Philippines which constitutes a demarcation between the organizations claiming communism but the strategy of people's war! The support for People's War by OCML-VP is also very eclectic, we are facing a real sectarian opportunism : even when in Paris a united campaign to support the People's War emerged, led by the CRI ( Red Internationalist Collective for the Defense of Political Prisoners), the OCML-VP preferred to go it alone and prepare to launch its own campaign while still operating within the CRI.


It is also important to note that these resolutions do not contain any real analysis of French imperialism and how to lead the fight against it. In the same vein we find no analysis of the rise of fascism today. How can a communist organization have a Congress without devoting an important part to the question of French imperialism and the rise of fascism today ?


Here is the substance of the criticism of OCML-VP: a denial of the importance of the revolt of the suburbs for communists in France, a negation of the role of suburbs in the revolutionary process and a denial of the strategy of the People's War. We are indeed opposed to the OCML-VP on every point.


Now, about the website "Les Matérialistes". For several reasons we will be brief in discussing their article: Les Matérialistes have no practice and only exist virtually, and this website now has an openly chauvinist and reactionary line (exaltation of the "Charlie Spirit", asserting that sex workers should be put in in re-education camps and other foulness ...).


Regarding our position on the Gauche Prolétarienne,It is very clear: the positive aspects of the Maoists in the years following 68 in France have always been emphasized by us and the fact that our newspaper is called La Cause du Peuple is not insignificant: "The CdP is a newspaper serving the struggles of the people. It was first promoted by the Gauche Prolétarienne, a Maoist organization after the movement of May 1968. This organization was the most combative of that time. We decided to highlight the CdP to give voice to all the exploited and oppressed, from the perspective of the emancipation of the proletariat and the conquest of power by the workers of our country, alongside the exploited and oppressed of the whole world.".


We invite all those interested in learning more on the position of the Bloc Rouge (Maoist Unification) about the revolt of the suburbs to come to the meeting that we organize with our comrades of the Maoist Communist Party - Italy this Saturday, November 21 from 15h in Aubervilliers at 51 rue de la Commune de Paris (see the call).


CHANGE OF ADDRESS FOR MEETING ON 21st NOVEMBER IN PARIS

Lot of people ask what is the difference between Red Block (maoist unification) and OCML-VP. This answer to OCML-VP can help them to understand the divergence. The principal difference is on the strategic question, VP opposes the strategy of Protracted People's War as they oppose the leninist conception of the Party. Those contradictions come mostly from the fact that Red Block (maoist unification) is a MLM organization whereas OCML-VP is more a Mao Zedong Thought organization (they claim to be "marxist-leninist and maoist" and not MLM, they say that USSR was capitalist in the 1930s...).