Fabricated criminal cases such as illegal possession of firearms, robbery, murder, frustrated murder, and others, are hurled against NDFP peace consultants, illegally imprisoning them and, as a result, sabotaging their work in the peace process.

Aside from grossly violating the Joint Agreement on Safety and Immunity Guarantees (JASIG), wherein those involved in peace negotiations are allowed to freely discuss and move without any threat of being arrested, fabricated criminal cases such as illegal possession of firearms, robbery, murder, frustrated murder, and others are hurled against NDFP Consultants, illegally imprisoning them and, as a result, sabotaging their work in the peace process.

NDFP Consultants Benito and Wilma Tiamzon and Roy Erecre are the latest victims of these treacherous acts by the GPH through the AFP and PNP.


Not only do the AFP and PNP resort to trumped-up charges but they themselves employ criminal acts such as planting evidences (documents, firearms and explosives) during arrest operations, robbing their victims of money and personal belongings, physical and psychological torture, and even to the point of enforced disappearances and extra-judicial killings.


Rene Bustamante, a political detainee, was forcefully arrested in Tanjay City, Negros Oriental, last June by elements of the PNP and the Philippine Army. He was arrested by virtue of a "John Doe" case and a grenade was planted in his belongings.


The AFP and PNP can go as low as maligning personalities of the National Democratic Revolution and NDFP Consultants through malicious intrigues involving lifestyle and immorality.


In the case of Roy Erecre, NDFP Consultant for the Visayas, the AFP claimed that he was vacationing and island hopping with a married woman when he was arrested last May 7. But in truth, they already knew upon surveillance that he was having his follow-up medical check-up in Davao.
NDFP liaison Judith Jaron was not arrested by the CIDG Davao (Criminal Investigation and Detection Group) with her husband (Erecre). Nonetheless, she fell victim to the operatives of the Intelligence Service of the AFP who went after her to get their belongings and plant firearms and explosives as they have done to Benito and Wilma Tiamzon in Cebu last March. Eventually, they robbed her things but she was able to exit safely out of Davao City.


The Aquino Regime must be held accountable for these condemnable actions. In order for the peace negotiations between the NDFP and GPH to flourish, the Aquino Regime must put a stop to sabotaging the peace process and instead comply with its obligations according to the JASIG and the Comprehensive Agreement of Respect for Human Rights and International Humanitarian Law (CARHRIHL). 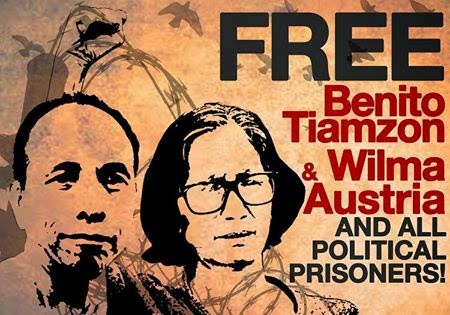 It is hard to know how to understand this article, as there is little prior information for us outside of the Philippines. Are the Filipino Maoists in a peace process with the government?

hope you can provide a link to an article that may give an overview.

this link will provide you with some background