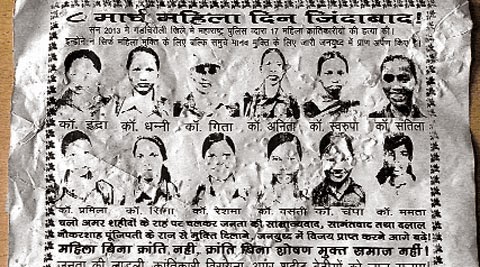 Women commanders have come to constitute almost half of the armed cadre of Maoists and are playing a major role in encounters, like they had done in the Sukma encounter in Chhattisgarh on March 11, security forces believe.


In the past one year, there has been a significant increase in women joining the armed wing of Maoists. Maoists do not leave behind their dead and take away the bodies. The posters enabled security forces to get a headcount.

(no revolution without women and without revolution there can’t be an exploitation-free society).

In the March 11 encounter in Sukma in Chhattisgarh where 15 security personnel were killed, women Maoist commanders played a role, according to the Central Reserve Police Force (CRPF) which lost 11 men.

In a presentation to the MHA, the CRPF had said Maoists were divided into three groups, and one group comprised mainly of women commanders in black uniform who fired from behind.

Democracy and Class Struggle offers a Red Salute to the woman fighters in the Maoist Army in India - like their Kurdish sisters in Kobane they show outstanding bravery and light the path to a future New Democratic India.