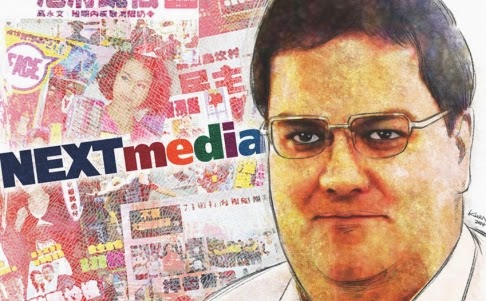 Democracy and Class Struggle says Chinese NGO operatives funded by the US National Endowment  for Democracy  and the National Democratic Institute should be excluded from any genuine Hong Kong people's movement.
Benny Tai regularly attends US State Department, National Endowment for Democracy (NED) and its subsidiary the National Democratic Institute (NDI) funded and/or organized forums.
Just this month, he spoke at a Design Democracy Hong Kong (NDI-funded) conference on political reform.
And funding from Mark Simon and Jimmy Lai should be out of the question

"My dad was CIA for 35 years"; "My internship with CIA, four years with naval intelligence…"; "[Next Media] work on human rights cases and have regular fights with many non-democratic regimes in Asia."

Comments like these in leaked correspondence and job-application letters from Mark Simon offer a rare glimpse into his background and that of his employer; insights some media have used to portray the American as a "man of mystery" with ties to the US Central Intelligence Agency.

Simon, 50, is a senior executive at Next Media Group, which is controlled by Jimmy Lai Chee-ying, a strident and unrelenting critic of the Communist Party and the Hong Kong government.

It is no secret that Beijing does not like Lai. Simon, as his closest aide, is also a target for attacks by the Beijing-loyalist camp.

A report in the July 23 edition of pro-communist daily Ta Kung Pao was headlined: "Jimmy Lai's close aide is ex-spy."

Simon shrugs off any such insinuation.

"[I am a] man of mystery to anyone who doesn't read my columns in Next [ Magazine], the WSJ [ Wall Street Journal], and hear me bellow on RTHK," he says in an emailed reply to the South China Morning Post.

"I have never made any secret that I worked for the US Navy. I am proud of it. But I left the navy in 1991 and [have] never been in pay, association, or employed in any intelligence work for any government since then.

Also, on the stolen emails alone, if I am a spy, I am really pretty damn bad at it," adds Simon.
Dubbed "the backstage man", Simon found himself taking centre stage after two massive leaks of documents and emails between Simon, Lai and other senior executives of the media group were released to the press in recent weeks.

They reveal discussions of Lai's financial support for pan-democrats and the planned Occupy Central pro-democracy protests, and Simon's role in the transfer of money.

Simon, Lai and Next Media did not contest the authenticity of the leaked documents but suspected the information was obtained through computer hacking.

On Wednesday, the group formally reported to police that their computer system was targeted by hackers. The case is now under investigation

The donations were not illegal.

But some pro-Beijing newspapers suggested the money originated in the United States, citing as evidence Simon's former intelligence job.

The leaked documents also seemed to suggest Simon helped Lai build relations with right-wing US politicians. In one case, Simon helped set up a meeting between former Republican vice-presidential candidate Sarah Palin and a group of pan-democrats during her visit to Hong Kong in 2009.

While the documents suggest nothing illegal, Simon was annoyed by how it went public.

"I am truly tired of them being called leaks. They are stolen information and are part of a disturbing pattern in Hong Kong."

Born in Falls Church, Virginia, a state where "thick skins grows naturally", Simon is a Republican and chaired the Hong Kong chapter of Republicans Abroad in the mid-2000s.

In June, the local press unearthed a link between Lai and Paul Wolfowitz, the former No2 in the US Defence Department under President George W. Bush. The two of them and Simon reportedly spent five hours on a yacht off Sai Kung.

Simon moved to Hong Kong in the early 1990s to take a job at the shipping company Sea-Land Service. He joined Next in 2000 after being introduced to Lai by conservative writer Bill McGurn - later Bush's chief speechwriter - at a Wall Street Journal editorial writers' dinner.

"One would have to be dishonest in Hong Kong not to know that Jimmy leans to the right when it comes to economic policy," says Simon. "He was truly friends with [US economists] Milton Friedman and Gary Becker.