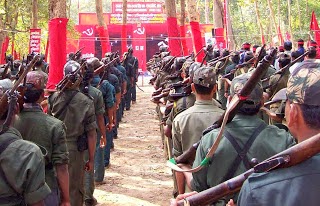 Why is the solidarity work with people's war in India such an important
task, especially to the Maoists
forces?

1)India is one of the todays storm-center of revolution, with the main
motivating force for proletarian world revolution - the oppressed peoples
and nations in their struggle against imperialism.

2)Today the CPI (Maoist) is leading the people's war in India, one of the
most developed struggles against imperialism.

Proletarian Internationalism is necessary for proletariat's victory, with
understanding this we have to defend the struggle of our comrades in India!
The struggling India must be defended and propagated as one of the
storm-center of Proletarian Worldrevolution, as example concerning people's
war and the CPI (maoist) as it leading center, as well as the creative way
to mobilize people under the banner of Maoism.

Solidarity has to be organized!

International movements for solidarity are not independent from situation of
class struggle in each country.

From history in Europe we know the glorious example of the International
Brigades, which made Proletarian Internationalism to a strong weapon in the
struggles against Franco-Fascism. That happened in a time of developed and
constituted Communists Parties in Europe, as well as with a socialist front
at the proletarian side under the leadership of Soviet Union.

In Europe, although the struggling is getting more, we have a dissipated
proletarian movement and also an organizationally weak position of the
Maoist forces.

According to our situation today in Austria and our experiences with
solidarity work till now, we can make solidarity work in setting selective
main points and initiatives. In this way we participated in international
initiatives with manifestations at the Indian embassy in Vienna, at the
international week of solidarity in 2012, at the meeting in Hamburg and also
at the international day to support political prisoners in India.

For that we made meetings for information, discussion and celebration, and also did
agitation and propaganda with leaflet and one extra short newspaper for the
campaign. In some points we also integrated the people's war in India in our
topics concerning Austria. For example we had a meeting with the topic "Only
peopleswar is able to smash fascism", where we talked about the armed
struggles of the Austrian proletariat in history and the struggle of the
comrades in India today.

As a midterm task, we are going to organize a committee, which should do
solidarity work in a continuous way and reach a certainly level of potential
to mobilize. This committee should be initiated, guided and supported by our
organization, but it should be carried by parts of the people (also from the
democratic movement). Concerning to this we make some positive experiences
with the campaign in 2012, but we didn't have enough strengths to tighten
our success and to organize the mobilized potential.

What can we do?

It is important for solidarity work to define a correct line concerning
avantgarde and peoples. So agitation and propaganda has to happen on two
levels: We have to work on the people's struggle for democratic rights, the
trade union struggle, as well as people's war. The main focus has to be on
propagating the CPI (maoist) and it's substantial role as leading center of
people's war , as well as Maoism as the leading ideology.

Through agitation and propaganda we also have to make connections between
important questions of the movement here (like repression or revisionism)
and the struggle in India. Ideologically we have to use the solidarity work
to propagate Maoism, to prove that the working-class and the people can only
go to victory with Maoism.

Also it must be a perspective to develop and organize more practically
solidarity. That could be campaigns against military intervention or boycott
against concerns which doing exploitation in India.

We must try to get the full potential of the progressive and solidly part of
the Austrian people for supporting people's war in India. In a longer term
our solidarity work has to reach a level to be able to defend and support a
revolution and a new-democratic state in one of the storm-center of
worldrevolution. For this it is necessary that our solidarity work (on each
level) has a consequent antiimperialist and antirevisionist character.
To go ahead with a successful solidarity work it's necessary that class
struggle in each country goes ahead and having development, as well as the
best possible unity (with the todays conditions) of the European
revolutionary forces.

Concerning to that, how can the 'International Committee of Support People'
War in India' work?

In Europe solidarity with India gives a platform, on which several groups,
organizations and parties work together.

With various ideologically differences it is a minimal unity to propagate Maoism and defend people's
war in India.

Based on that, we think we should make initiatives and documents, which
connect the topic of people's war in India with questions of class-struggle
in Europe in a creative way, as well as finding a way for the organizations
which are participating, for political association in a selective way, in
doing pan-European initiatives concerning topics like George Ibrahim
Abdallah, or concerning the questions of class struggle (like boycott of the
EU-elections). That is one possibility to support class-struggle in Europe
on base of the unity of supporting people's war in India, without trying to
build any formally unity or unity without principles.

Ahead with people's war in India!