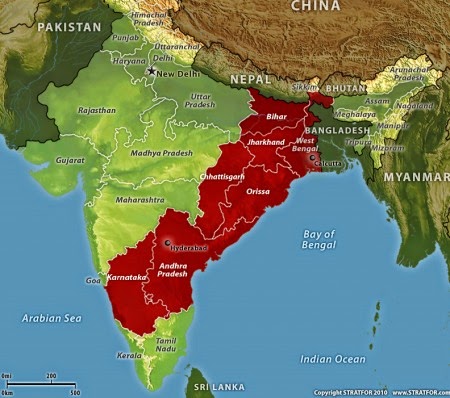 Honour to the martyrs of the revolution in India!

Support the People's War in India!

It is with joy, enthusiasm and excitement that we hail the 10th anniversary
of the CPI (M).

The formation of this party was a powerful strengthening for the
international communist movement and a great assertion that it is the
people's war that unites communists and forge genuine Maoist Communist
parties.

An example from which we draw lessons, inspiration, but mainly a great
confidence and an ideological strength for the proletarians and the advanced
masses in our country.

The formation of this party and its 10 years long history met and meet the
aspirations and desires of the working class, the peasantry and the
oppressed broad masses of India to have a genuine proletarian party that
leads them toward a revolutionary change and the building of New Democratic
society, marching to socialism and communism.

The great decision to found this party has also pointed out a method to
build unity, as shown by the new and important stage of unity of the Indian
communist movement represented by the merger of CPI(ML) Naxalbari and CPI
(M).

At the time of its formation, the CPI (M) wrote in his statement:

"The new Communist Party of India (Maoist) will continue to act as a
consolidated political vanguard of the Indian proletariat.

Marxism-Leninism-Maoism will be the ideological basis guiding its thinking
in all the spheres of its activities. It will continue its struggle against
right and left deviations, particularly against revisionism, by taking this
as the main danger for the communist movement as a whole. It will still seek
to unite all genuine Maoist groups that remain outside this unified Party."

******
10 years later, this promise has been met and, therefore, it is a proofed
Maoist road and line to draw from, in every country where Maoists need to be
united in a vanguard communist party.

But it is also an indication for the ICM, in the process to reconstitute an
international organization after the collapse of the RIM.

Marxism-Leninism- Maoism, People's War, unity of the MLM Communists. Our
party is openly committed with this path, it has been working for this
during the past years and is united with the CPI(Maoist) in the construction
of this process.

The merger of CPI(M-L) Naxalbari brings better conditions
for the advance of this process of unity, which all the genuine MLM parties
and organizations must look at and draw lessons from, and, consequently,
take side.

The unity of MLM parties and organizations is a crucial element to develop
support to the People's War in India internationally.

******
India enters overbearingly the world scene of imperialism with its MNCs,
that play an active role in this system, the same active role that the
Modi's new fascist Hindu regime wants to play.

Even in our country, the tie between Indian MNCs and Italian masters is
being consolidated as a relationship of collusion, alliance - yet within the
contention and competition on the world market shaken by the economical and
financial crisis.

The case of the war industry, see Finmeccanica, the case of the steel industry,
see Arcelor-Mittal and Jindal, are showing that the Indian MNCs
become also an internal enemy for proletarians in Italy, and the
Italian MNCs fully participate in the super-exploitation of the proletarians
in India and the robbery on Indian people.

But it must be said that in this way the workers go trough the experience
that masters, from Italy to India, are united in seeking their profits on
the blood the workers and masses and that the proletarians are a single
class on international level and must strongly tighten their ties of
solidarity and struggle
.
And our party is committed to make this internationalist tie concrete.

This tie in the economic field is translated into a new political harmony
between the Modi's fascist government and the modern fascist-style Renzi's
government, that collects Berlusconi and all the Italian imperialist
bourgeoisie.

These governments want to walk hand in hand and treat their relationship at
the light of this.

The Indian government has also asked our government, as all European
governments, to stop the activities in support to the people's war, that in
our country have a solid base in our party, in the International Committee
and its dozens and dozens of initiatives carried out in recent years among
workers, youth, women and genuine revolutionaries and democrats.
The Indian government sends back a marine who murdered Indian fishermen
while uses the most brutal repression on its own people. This is the second
reason to consider this collaboration as part a of the internal enemies in
the class struggle in Italy.

We are well aware that the best internationalist support is to make
proletarian and socialist revolution in our country and that the best
solidarity to the people's war is to begin people's war in our country.
For this we are working, amidst hurdles, advances and setbacks, for a very
difficult enterprise; and every time our party had the opportunity to talk
with Indian comrades, we found understanding of these difficulties and
encouragement.

But the beginning of people's wars depends essentially on the ideological,
political and organizational basis, and on this the contribution of the
Indian communist movement, as that of other parties of the ICM, is one of
the decisive factors.

We are exactly at this stage of ideological and political preparation, to
fulfill our duties as genuine internationalists.

Long live the 10th anniversary of the formation of CPI(M)!

Honour to the martyrs of the revolution in India!

Support the People's War in India!