Our constitution says that the land, minerals, forests, water, and air resources belong to the state,” says Boris Litvinov of Donetsk People's Republic 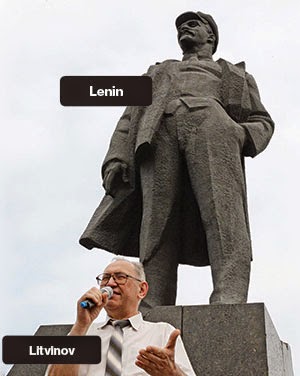 Democracy and Class Struggle says the People's War against the Ukrainian Oligarchs continues on the economic as well as the military front despite the difficulties for the New Donetsk People's Republic.

If comrade Litvinov wants to emulate comrade Lenin he must wage economic war and not just political or military war in the Donetsk People's Republic.

We wish him  well in his transformation from Parliamentarian to Revolutionary Communist in face of the War against the Ukrainian Oligarchs.


Rinat Akhmetov’s holdings in eastern Ukraine are themselves an object of contention.

Boris Litvinov, a former Communist Party parliamentarian and now chairman of the Supreme Soviet of the breakaway Donetsk People’s Republic, sits in an office festooned with the rebels’ black, blue, and red flag.

“Our constitution says that the land, minerals, forests, water, and air resources belong to the state,” he says.

And he should know—he wrote it.

“The DPR believes that basic industries should be kept under state control,” he says, adding that it will also “nationalize the entire chain of electricity production.”

Steel is a basic industry, meaning Akhmetov’s factories, about half of which are now behind rebel lines, could be nationalized if the DPR lasts long enough to enforce its constitution.

Akhmetov and other tycoons, who have invested hundreds of millions in the region, support the Kiev government.