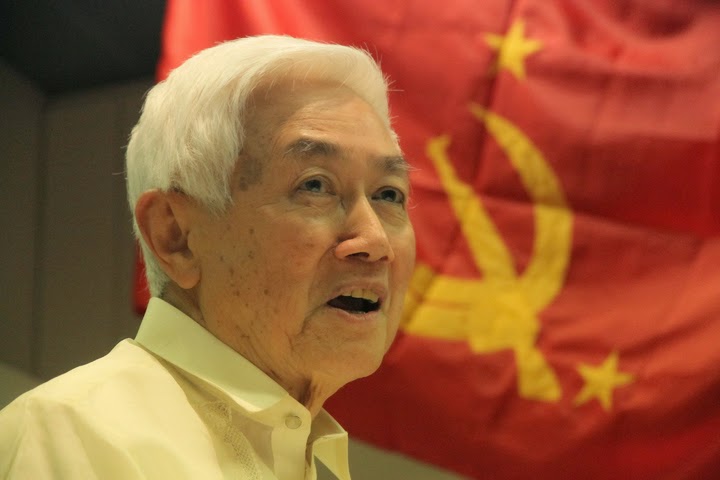 
21 September 2014
The National Democratic Front of the Philippines (NDFP) conveys its warmest greetings of comradeship and solidarity to the Communist Party of India (Maoist), its People's Liberation
Guerrilla Army, the People's Militia, and the revolutionary masses of India, on the 10th anniversary of the founding of the Communist Party of India (Maoist) on 21 September 2014.
All the eighteen revolutionary mass organizations allied in the National Democratic Front of the Philippines and the Filipino revolutionary masses join you, our comrades-in-arms, in celebrating your 10th anniversary.
We join you in honoring the almost two thousand five hundred revolutionary martyrs who have sacrificed their lives for your revolutionary cause since your Party's founding ten years ago, who include hundreds of great leaders of the revolution, from the topmost level of your party to its basic levels, the scores of valiant fighters of the PLGA, and many among the masses.
Together with other revolutionaries throughout the world, we rejoice at the brilliant victories and achievements you have attained in the last ten years of fierce revolutionary struggle. We are inspired by the establishment of Revolutionary People's Committees in the guerrilla bases of Central and Eastern India. These organs of political power are, as you declare, the beginning of building a democratic, sovereign, federal people's republic; self-reliant, just and equitable. The RPCs' departments for defense, finance, agriculture, trade & industry, judicial, education and culture, health and social welfare, forest protection, and public relations, cover the wide range of revolutionary governmental functions.
We firmly support your call to the people of India to shatter the shackles of imperialism and feudalism, destroy the rotten system of the Indian state, and build the people's future and that of the country with their own hands!
The revolutionary Filipino people, like you, are waging a people's war against US imperialism and the local exploiting classes. We too fight to destroy imperialism, feudalism and bureaucrat capitalism! After forty five years of fierce revolutionary struggle, our revolutionary forces, the Communist Party of the Philippines, the New People's Army, the National Democratic Front of the Philippines and the revolutionary masses are now operating in substantial portions of 71 provinces out a total 81 provinces in the country. We too are building organs of political power which form the people's democratic government.
We deeply appreciate your firm support for our people's war. We too stand in firm solidarity with your people's war. We are determined to further strengthen the bonds of solidarity between our peoples and our revolutionary forces.
We extend our earnest revolutionary wishes to you in the Communist Party of India (Maoist), your People's Liberation Guerrilla Army and the revolutionary masses in India for ever greater victories and achievements in your people's war!
Posted by nickglais on 10/02/2014 03:26:00 PM

Hi. In some preceding comment, Democracy and Class Struggle upheld Stalin and the Maoist ideology, and believes this is the ideology that the proletariat should take up. However, it seems to me that what is needed is not nationalist forms of 'socialism in one country' based on a discredited Stalinist model, but rather on the true and authentic current of Marxism championed by Lenin and Trotsky, who correctly saw Stalin as the gravedigger of socialism. The Chinese revolution was the revolution of Stalinism, with its stageism, nationalism, and cult of personality of the leader, police state regime going under the name of 'Marxism-Leninism'. China as with Cuba and North Korea was the victory of Stalinism, and not authentic socialism. However, the issue in India or China is not now one of national liberation.

What does Democracy and Class Struggle make of Trotsky? Isn't he more relevant than Mao for the Chinese and Indian people at the moment? I think he is.I think that Trotskyism should be known more in both India and China and the CPI Maoist should take up a Bolshevist strategy based around the workers.

The above comment is full of misunderstandings and incorrect analysis and I will do my best to analyse the comment word by word.

The first sentence misses the point of my previous comment that Maoists see the Stalin period has being revolutionary but still flawed and Mao gave a lot of thought to correcting the mistakes of this first wave of socialism.

The second sentence talks about nationalist forms of socialism but does not understand the central role of imperialism in the importance of national liberation struggles.

Clearly Trotskyism had lost is way with the defeat of the German Revolution of 1923 and failed to understand the potential of national liberation struggles against imperialism - while the Revolution moved to the East particularly China, Trotsky was still stuck in the mindset of a single contradiction between capital and labour in the West and did not understand the complexity of contradictions that was emerging in the communist movement has he re-asserted the old Parvusian theory of permanent revolution and failed to understand the nature of the national democratic revolution against imperialism in the 20th century.

To dismiss the Chinese, Korean and Cuban Revolutions under the rubric of "Stalinism" shows how far your mind is from an analysis of concrete conditions and the complexity of contradictions in the anti imperialist struggle.

Your assertion that in India there is no requirement for national liberation belies your knowledge of concrete conditions in India and I would recommend you a series of articles in Towards a New Dawn that analyses the semi feudal semi capitalist nature of India and the importance of the New Democratic Revolution in India.

Marxism is no lever for construction and magic words like "permanent revolution" " "world revolution" are not substitutes for concrete analysis of concrete conditions the "soul"of Marxism Leninism Maoism.

Trotskyism with its revolutionary rhetoric was irrevelvant from the 1920's in Russia has building of socialism became the order of the day.

It is irrevelvant to India and Philippines today has real revolutions have no time for the poltical fantasies of "permanent revolution" "world revolution" but are grounded in the realities of national class struggle and People's War.

Yes - In a full spectrun of resistance of all oppressed against imperialism.

Not some economist "bolshevist" workerist fantasy of European Leftists which is an insult to Lenin who was a profound believer in national liberation against Imperialism.

Yes for Maoists the principal contradiction in the world is between the oppressed and Imperialism and that needs a largeness of mind to understand the complexity of contradictions.

Given that you agree with the Democrcay and Class Struggle analysis of Ukraine and Hong Kong that is rooted in Maoist Ideology -maybe it is time for you to emancipate your mind and stop caricaturing Maoism and begin a serious study of this revolutionary ideology of the 21st Century- make a jailbreak from Trotskyism and become a comrade.

Recommended starting point read Mao on Contradiction and Trotsky's In Defence of Marxism both written in the late 1930's - one is an exposition of dialectics and the other of sophistry - then decide who is the revolutionary ?

thank you for your comments.
However, a Nepali Maoist leader, Dr. Bhattarai, said that 'Trotskyism is more relevant than stalinism' in the 21st century. What do you make of that claim?

If a Maoist leader who led a Peoples War makes such a claim, should you and others like you listen?

Nick Glais has a partial understanding of the revolutionary sience. He does not understand that while it is true that Maoism superseded Leninism, since the formulation of Maoism by Chairman Gonzalo, and then the experience in Nepal, to the particularities of our own time, with no red bases anywhere in the world, and since the dissolution of the RIM, mass confusion.
this is due to the lack of analysis and summing up of the previous era, including Peru and Nepal. The only person who has done so is Bob Avakian, chairman of the RCP, who has put forward a New Synthesis of Communism. There is going to be a debate in New York next month between the great black intellectual Cornel West, and Bob Avakian on revolution and religion. I suggest that everybody watches it, and makes comments on this historic debate by two of the leading intellectuals in the US and the world.
http://revcom.us/revolution-and-religion/index.html

Interested comrades who want to know more about the Stalin era should check out this site to get a more rounded view of Stalin and his legacy. Also they should read the work of historian Grover Furr.