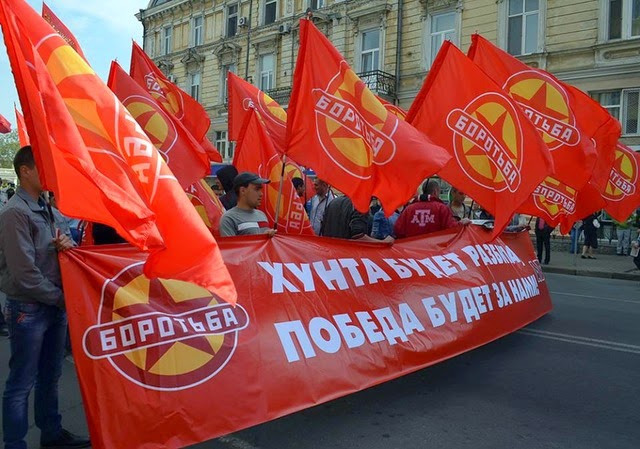 Democracy and Class Struggle publish this second part of Victor Shapinov of Borotba's  interview with Greg Butterfield of Workers World.

Democracy and Class Struggle wish Borotba comrades every success and agree that you should not be reconstructors, you need to develop your revolutionary ideology through two line struggle rather than be eclectic trying to combine Stalin and Trotsky when clearly they split into two.

We urge you to develop the universal ideology of Marxism Leninism Maoism in the particularity of the Ukraine develop the class struggle against the Oligarchs, develop the mass line, not populism and apply Protracted People's War both as a strategic concept and military line.

You need to recognise continuity as well as rupture in the communist movement.

Workers World: Tell us about your background and the founding of Union Borotba.

Victor Shapinov: I was born in Russia near Moscow, where I also went to school and university. At age 18 I joined the communist movement and the Russian Communist Workers Party (RKRP), which still exists.

For several years, I communicated with Ukrainian leftist and communist militants. In Russia, it was not the best time for left activities. There was a lot of repression. So in 2005, I moved to Kiev and began to organize there, mostly with former members of the Communist Party of Ukraine (KPU). In this way I began to work with Sergei Kirichuk and others who later participated in founding our movement.

In the late 1990s, the Communist Party was very popular. Many people believed that its chairperson, Peter Simonenko, could win the presidency. But the party leadership was very passive and always wanted to make deals with the bourgeois camp of Ukrainian politics.

Grassroots activists were very upset, especially the young members, and there were a lot of splits from the KPU at this time.

We always tried to bring these forces together in some way. So we formed the Che Guevara Youth Movement, which became famous for organizing a rally against privatization and for renationalization of big factories. It was the biggest anti-capitalist mobilization ever held in Kiev [since the breakup of the Soviet Union — WW].

Afterward, we set up the Organization of Marxists of Ukraine. It was the result of the merger of several groups. It turned out to be very broad and academic, and not very revolutionary.
After assessing the development of this organization, and following further splits in the Communist Party, we were able to found the Borotba movement. We began this work in 2011 and held our founding congress in May 2012.

It’s important to explain about the Communist Party of Ukraine. At that time, its leadership was always seeking alliances in parliament with whichever capitalist party was strongest.

Not many people in the West know this, but before allying with the Party of Regions of [deposed President Victor] Yanukovich, they were partners with the party of Yulia Timoshenko [far-right politician associated with the 2004 “Orange Revolution” and today part of the Kiev junta].

Alexei Albu, one of our comrades, was a left-wing leader of the Communist Party and Komsomol, the communist youth organization, in Odessa. He resigned and joined in organizing Borotba. Other militants in Odessa followed his example.

We focused on organizing within the labor movement. But by late 2012 and early 2013, the issue of fascism and radical nationalism came to the fore.

Borotba was the first party to organize a protest against the fascist Svoboda Party entering parliament.

We never supported the Yanukovich regime, though, because we knew it was one of the reasons for the rise of the far right. Its politics were directed only to the interests of the biggest businesses, the so-called oligarchy. It bestowed money and power on the oligarchic groups, and these in turn supported the neo-Nazis.

We could see that the fascists were an instrument that they used in politics.

WW: Borotba seems unique in the post-Soviet left in bringing Marxists from many backgrounds and historical currents into a united communist organization. How were you able to achieve that?

VS: We worked hard on it. It involved both theoretical and organizational work.

From the theoretical side, we tried to focus on the contradictions that exist in society now and analyze them from the point of view of Marxism.

We see that the splits that were part of the communist movement in the past are not so important now, or we see them in a very different way. We saw that there were some groups that are like reconstructors [this term refers to people who re-enact historic military battles, like Civil War re-enactors in the U.S.]. They want to refight the old battles.

We don’t want to be like this. We want to make real politics for the working class and oppressed peoples, and not play at being Stalin, or Trotsky, or Mao Zedong, or whatever.

Because those people did not play at being Marx or the Jacobins.

They made revolutionary politics for their times.

How do the common people see us? That is a practical criterion for our work, not the opinions of some publications that spend all their time critiquing other leftists.

If you don’t waste a lot of time on that, you have more time to observe how the people see you and how to reach them.

Even how bourgeois journalists see us is more important. How will they try to show our activities? Because the majority of people watch television or read the bourgeois press, it is important how we are represented to them.

It’s a question of how to use the possibilities offered by bourgeois politics and the bourgeois media to promote our work.

Don’t be a sectarian who only goes to a picket line with their own newspaper to sell and tune everything else out.

I can’t say that we were so successful in these things, because the situation in Ukraine gave us very little time to realize our plans.

Next: Part 3 — After the coup: Borotba and the AntiMaidan movement

Part 1 of interview with Victor Shapinov