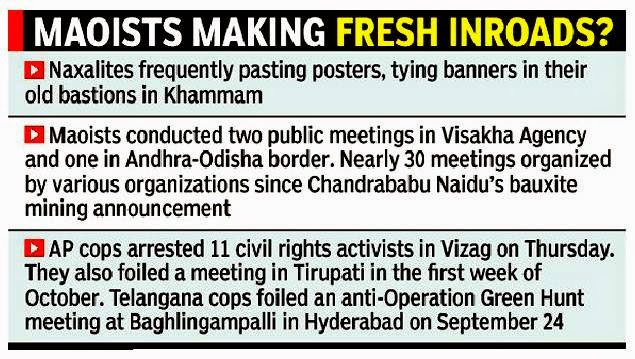 Democracy and Class Struggle publishes this report from Times of India for information we cannot verify its accuracy - but what we do know is that Naxalities never Die be it in Andhra Pradesh, Telengana or elsewhere in India.
An idea cannot be killed and that idea of New Democracy for India is a burning flame that will burn brighter and engulf the Hinduvuta Fascism of Narendra Modi and the comprador bourgeoisie India's global capitalist fifth column.
End Operation Green Hunt the War on The People - Smash the Hinduvuta Fascism of Narendra Modi
HYDERABAD: The sudden spurt in activities of the banned CPI Maoist party and the civil wings allegedly affiliated with it, both in Telangana and Andhra Pradesh, seems to be giving the two state governments the jitters. With more than 20 civil liberties organizations becoming active in the two states post bifurcation, security personnel now suspect that Maoists are trying to make fresh inroads into the two states with the support of the civil society.

That perhaps explains why cops in both the states have started cracking down on civil rights organizations trying to raise their voice against Operation Green Hunt or organize meetings against it. While on Thursday, 11 civil rights activists were arrested in Visakhapatnam, (six of them for trying to hold a press meet and five who were returning from the DIG camp office after attempts to submit a representation against their colleagues' arrest), the Telangana cops foiled an anti-Operation Green Hunt meeting at Baghlingampalli in Hyderabad on September 24. Another such meeting was disrupted by the AP cops at the CPI office in Tirupati in the first week of October.

Though prior to bifurcation, senior Telangana cops had ruled out the possibility of resurgence in the Maoist movement after the state is split, the presence of Naxalites has lately been visible in Adilabad district. In fact, the DIG of that area too had admitted to having information about two Maoist squads being active in the district that shares borders with Gadchiroli area of Maharashtra. According to sources, Maoists escaped a possible exchange of fire in Adilabad just last month.

In yet another indication of the changing reality, elaborate security arrangements were made, including deployment of Greyhounds, in and around the Jodheghat forests in the district on Wednesday when Telangana CM K Chandrasekhar Rao went to pay tributes to revolutionary Komaram Bheem on his death anniversary.

According to a senior police official in Khammam, the Maoist presence has been visible in the district, especially in their old bastions, with militants frequently pasting posters, tying banners and even calling upon the people to observe the party formation day recently.

In AP, the Reds along the Andhra-Odisha Border (AOB) have stepped up their activities after AP CM N Chandrababu Naidu mooted bauxite mining with the support of tribals in Visakha Agency on World Tribals Day. Since then, Maoists have conducted two public meetings in Visakha Agency and one at the Odisha border, all of which saw heavy attendance by tribals. They have also killed almost five tribals in the AOB area by branding them police informers. This apart, nearly 30 meetings have been organized by various parties and organizations in Visakha Agency since Naidu's bauxite mining announcement, sources said.

According to sources in the AP police department, the outlawed wing has shipped in cadre from Chhattisgarh and its military wing, PLGA company, and their movement has been visible right up to East Godavari where the Naxalite movement was wiped out over one and a half decades ago. The Reds are now trying to revive their old squads, said an official involved in anti-Naxalite operations.

Senior cops in Adilabad too admit to having information about two Maoist squads being active in the district that shares borders with Gadchiroli area of Maharashtra.