India : Harsh Thakor writes On October 1st, 2014, one of the biggest conferences constituting an anti-black law joint front of 40 revolutionary organizations was held in the district of Barnala in Punjab.,protesting the black laws 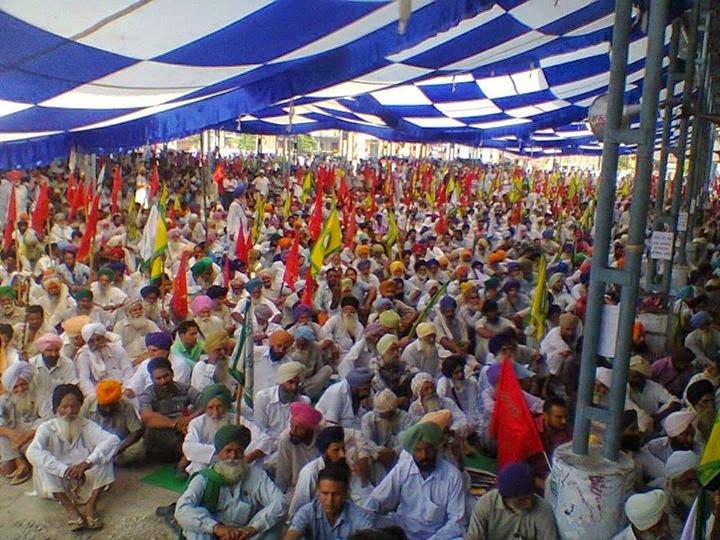 On October 1st, 2014, one of the biggest conferences constituting an anti-black law joint front of  40 revolutionary organizations was held in  the district of Barnala in  Punjab.,protesting the black laws.

Activists  staged a protest against the Punjab Prevention of Damage to Public and Private Property Bill, 2014, terming it as an attack on the fundamental rights of the people.

They demanded that the Bill be immediately withdrawn.it followed 2 similar conventions on September 29th at Amritsar and September 30th at Jalandhar.

The grain market in Barnala looked like a huge bonfire being being lit with the masses storming like many streams flowing into a river.

The peasant leaders explained how the state used the black laws to curtail peasants protest for basic demands like compensation for suicides,opoosing water pollution,drugs and goondaism,re-distributing surplus land,awarding plots to landless labourers etc.

They elaborated how the laws trampled on their everyday class struggles and how they were an obstacle towards building any movement.

They also condemned the arrest of G.N.Saibaba,the onslaught of Operation Green Hunt and the fascist policies of Narendra Modi. 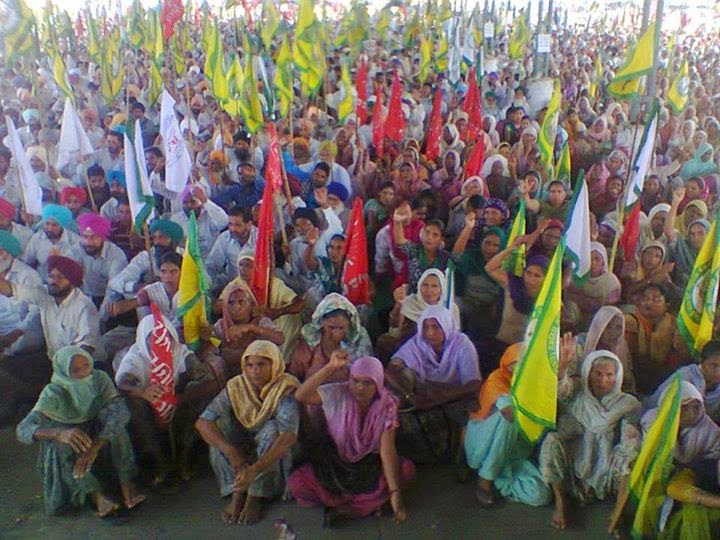 They said it was a “dangerous” measure to prevent public organisations, trade unions and political parties from raising their voice against the government.

The leaders lashed out at the government for failing to ensure that the farmers got remunerative prices for their produce.They referred to the plight of basmati growers in this regard. They said that most farmers, already burdened with loans, had to bear the brunt of nature’s fury with rains taking a toll on their paddy crop. They alleged that while the farmers were being fleeced in the grain markets, the government continued to back “capitalist forces.”

Leaders Satnam Singh Pannu and Datar Singh said the ‘black law’ brought in by the state government may be misused. They pointed out that agitating organisations had never damaged public or private property.Speakers representing all 3 sections of the Naujwan Bharat Sabha redressed the meet explaining how all movements for better education and medical facilities or against corruption were thwarted by the black laws.Comrade Sumeet Singh of the Naujwan Bharat Sabha  narrated the various protests like the a agitation for bus fare passes which were trampled upon.

Above all what was welcoming was the participation of the Textile Hosiery Workers Union and Karkhana Mazdoor Union from Ludhiana.(supporting Bigul Mazdoor Dasta)The alliance of Industrial workers is a neccessary component in a revolutionary movement and they exhibited great fighting spirit and discipline.

Comrade Rajwinder the secretary of the Union explained the significance of combating repression on the workers movements and how the state used laws to prevent any gathering and arrest the leaders of workers.It had conducted a meticuluos preparation campaign in the bastis and street corners of Ludhiana.from August 5th to August 10th.,Even Lok Morcha,Punjab office-bearers praised the efforts of the Ludhiana Textile workers Union.)inspite of representing conflicting trend)

The participation of Kirti Kisan Union and B.K.U.(Krantikari) was somewhat negligible although the K.K.U. secretary Hardev Singh Sandhu came on stage.5,000 people participated from the B.K.U.Ekta (Ugrahan) and 3,000 from the Punjab Khet Mazdoor Union.The gathering proved that the unity of all revolutionary forces collectively  is a necessary perquisite in organizing  a mass democratic protest.The noticeable presence of many women participants had great significance .The Stree Mazdoor Sabha speaker redressed the question of rapes and attacks on women's rights.

What was of paramount importance was the intense work done in mobilizing the masses,particularly the workers and peasants.In almost every nook and corner of Punjab from Jalandhar,to Ludhiana,to Amritsar,to Bhatinda,to Sangrur etc meticulous propoganda was done explaining the need to stage such organized protests and wall-writing,leafleting and postering was done all over.

Here the Naujwan Bharat Sabha units played an important role.It was a  sight to behold witnessing how various sections marched to the venue  with  the discipline and preparation of an army batallion.

They left the venue after 4 hours with a most determined spirit shimmering in their hearts to fight to the end.

After the  agitation the leaders made plans on how to continue the agitation. 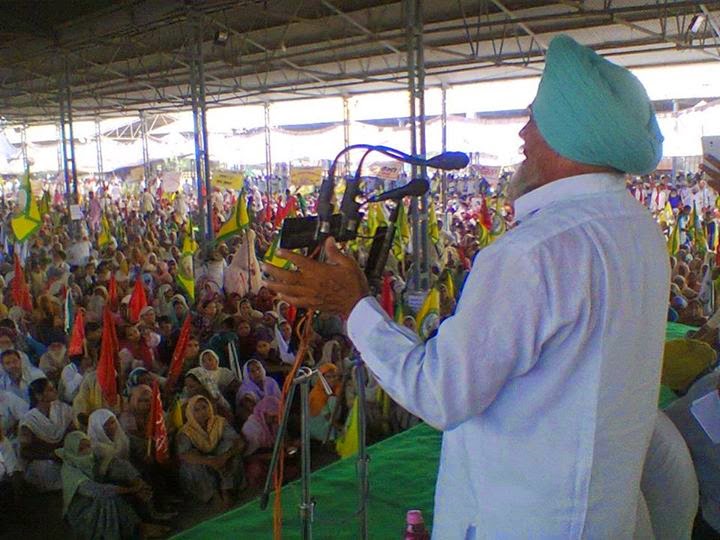