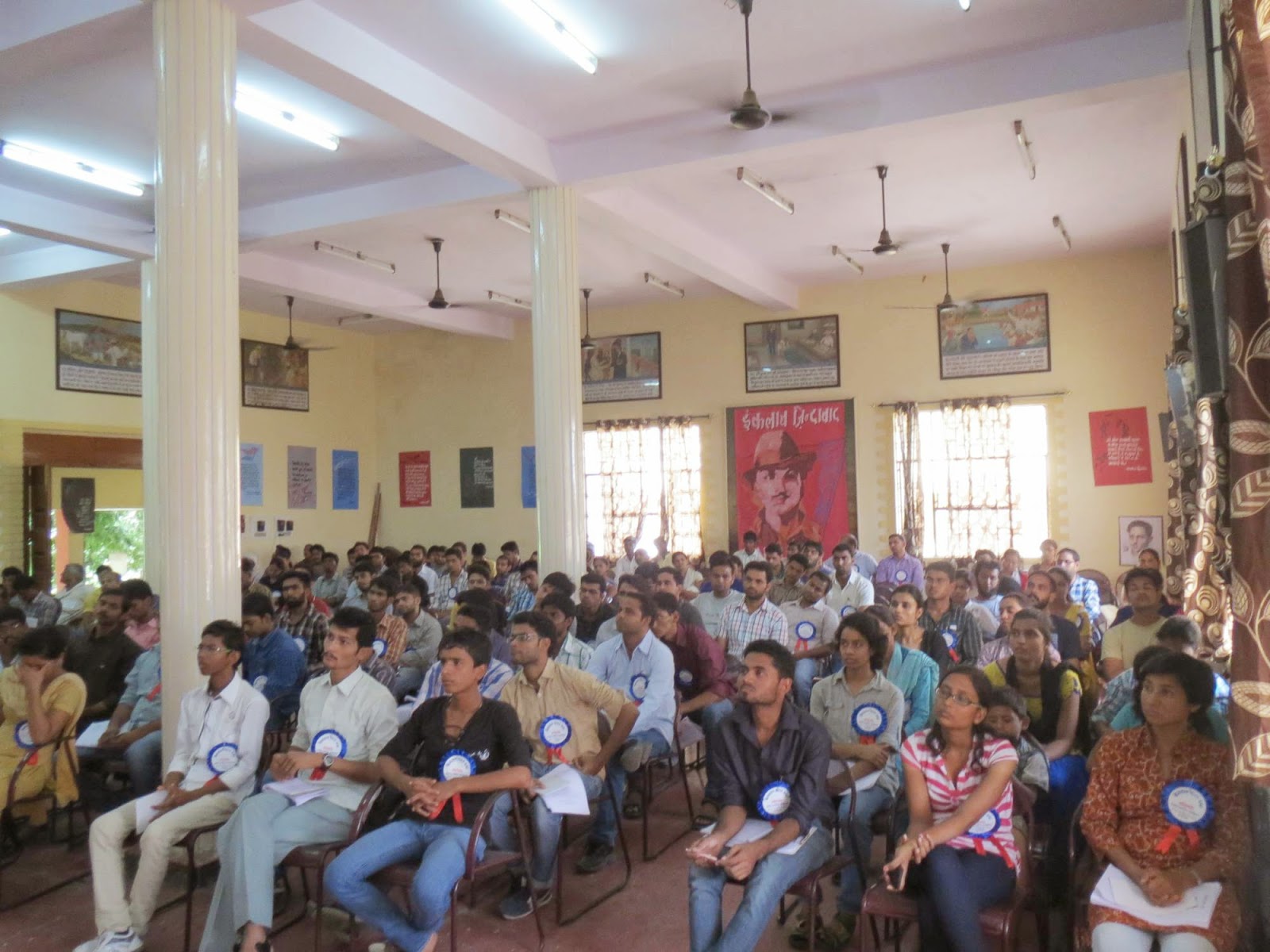 Democracy and Class Struggle sent a message of greeting to the Nuajwan Bharat Sabha Conference has we recognise the excellent activism of these young comrades - but we must also offer a word of criticism has while they applaud the Maoist Cultural Revolution they oppose Protracted People's War.
Marxism Leninism Maoism is not eclecticism but holistic and integral and recognition of Protracted People's War is fundamental to Maoism.
On 26th,27th and 28th September the Nuajwan Bharat Sabha held it’s 1st all –India conference. The author attended the event on the 2nd and 3rd day in Delhi. For the 1st time an All-India structure was developed and office-bearers officially delegated.
The conference continued the glorious tradition of Shaheed Bhagat Singh whose name is continually etched in the annals of revolutionary history.
It is the 1st time since Shaheed Bhagat Singh that Naujwan Bharat Sabha has been given an all-India structure. All other groups have had state units of NBS and not a national organization. The delegates carried the Red Torch of Shaheed Bhagat Singh forward.
There have been NBS’s in the past and even now belonging to different streams of the revolutionary camp.

What has impressed the author over the years has been the resolute dedication of the activists of Naujwan Bharat Sabha, particularly in the cultural and working class sphere.
It’s greatest impact has been in Lucknow,Allahabad and Gorakhpur in Uttar Pradesh, in the Karivela nagar area of Delhi, in Ludhiana in Punjab as well as in towns of Haryana.
The activists have lived in the bastis of the workers and studied their problems. They have plunged into trade union struggles  and directed them with revolutionary orientation like with the Textile and Hosiery workers  union and in Ludhiana and Punjab and the roller workers union in Delhi.
They have armed themselves with the anti-imperialist and anti-capitalist ideology and they have taken  some lessons of Marxism-Leninism –Maoism.
They have continuously launched cultural programmes spreading the message of Shaheed Bhagat Singh.Great ideological work has been done to educate cadres ideologically.


Below I am compiling notes from the NBS convenor’s report.


Originally it was formed in2003 in Gorakhpur,in Uttar Pradesh.In Karivela nagar ,in Delhi. an inaugural cultural programme was launched on 31st December..In 2004 a  Shaheed Bhagat Singh bookstall was introduced.

In March,2005 in Keshavapuram thana an agitation was launched against the owner of a factory who caused the death of a worker and an anti-repression fronmt was formed.

In  early 2005 a 3 year campaign upto September 2008,called the ‘Smruti Sankalp Yatra’  was inaugurated to commemorate the 100th birth centenary of Shaheed  Bhagat Singh.On the day of his martyrdom and bit a series of cultural programmes ,street plays, cultural programmes ,marches and cycle rallies were carried out .

The biggest programmes took place in Lucknow.Gorakhpur and Allahabad and the youth were greatly influenced. In Delhi and in Ludhiana and in districts of Punjab  like Chnadigarh and Ludhiana a significant impact was made.

The campaign culminated in a big rally in Delhi at Jantar Mantar on 28th September,2008.

The youth continuously traversed the bastis of workers and the factory areas as well as the schools and colleges. Libraries were created for workers and youth as well as for small children.
The youth meticulously formulated a strategy to win over the youth into following the road of Bhgat Singh.On August 15th major programmes were held propagating the hypocrisy of the ‘Independence’ achieved on August 15th,1947.Study circles were created for workers and youth.A campaign was also built  in 2007 to’save schools.
Every  year medical camps were held for working class and youth in bastis.The NBS integrated with the Bigul Mazdoor Dasta  in leading the workers struggles. It placed emphasis on educating politically conscious workers and creating  revolutionary forums and circles amongst workers.In Punjab the NBS became part of a major movement of 40 different groups  to oppose the black laws. Even after the Shaheed Sankahlp Yatra ended in 2008,continuous cultural programmes street and cycle rallies wee held on Bhagat Singh’s birthday and martyrdom day.

The NBS comrades in Punjab have launched a protracted trade union agitation of Textile workers.It also commemorated the martyrdom of Kartar Singh Sarabha.In 2009 it also participated in the struggle against price rise and electricity rates. The Union leader Rajwinder was arrested in  on 21st April,2008 when launching an agitation .On 28th September 2008 the Lok Swaraj Abhiyan was inaugurated after the completion of the Sankalp yatra.ComRajwinder gave the report of the 3 year Sankalp yatra programme.In Delhi the main work amongst the youth was in propagating revolutionary literature and imbibe political consciousness in the youth.Revolutionary bookstall exhibitions were continuously held from 2005 to 2014.

The most active region in Delhi was the Shahbad Dary region.In April 2010 with Bigul Mazdoor Dasta the NBS joined the city employment guarantee scheme and launched a huge agitation.A rally was staged at Jantar Mantra.A well attended joint programme was conducted with the women’s organization in October 2013.From 30th May to 8thJune a cultural  campaign was launched for children. The ideology of Bhagat Singh was propagated in Schools.New cultural teams were continuously formed.


In Gorakhpur it carried out an agitation of sweepers in 2008 from 16th May to 19th June.Noida-Ghaziabad was the most active region of the NBS in Uttra Pradesh with the working class.In 208 it participated in a peasant agitation in Kashinagar in Gorakhpur.During the 2014 election campaigns were held in Delhi exposing the fraud of parliamentary elections.


In Chandigarh in 2014 it carried out a solidarity campaign for the Mahindra workers.


In 2012 work started in Patna,in Bihar with a chain of cultural programmes.The bhagat Sing commemoration days were commemorated with significant meetings. Later a campaign ‘to save education’ was held. A programme was also conducted to give solidarity to workesr struggle in Wazirpur.


In recent months a chain of programmes have been held opposing the Israeli aggression in Gaza.The NBS was an active constituent in the Indian People’s solidarity with Gaza.It joined hands with intellectuals, students and workers in protests from Mumbai, Delhi ,Allahabad to Patna.


In recent months the NBS has played a major role in guiding the agitation of the Garam  roller workers. Consistent work has been done with the Kariveli workers Union.A Gram roller workers samiti was formed and amajor hartal was led on 27th August.Major demands of workers were won.The Delhi Ispat workers union was formed.


Thus I conclude that the NBS has put their heart and soul in imbibing the teachings of Shaheed Bhagat Singh and lit his ideology all over like lighting a  red torch.
I admire the sincerity and discipline of the cadres who toiled night and day and resurrected the spirit of Comrade Arvind who died in 2008.
Without doubt they are a part of the revolutionary camp in India.
Comrades like late Dipankar Chakraborty editor of ‘Aneek’ and vice-president of A.P.D.R ,Bengal was greatly impressed by them.


What is need is to build class struggles of the youth and a clear cut revolutionary programme .Mere political propaganda cannot build a youth organization or movement and a clear revolutionary class-mass organization has to be built up.Greater emphasis ahs to be placed on redressing the day to day issues of the masses like price rise and on building agitations of the youth.It also needs to work in the rural areas and not confine itself to urban areas. 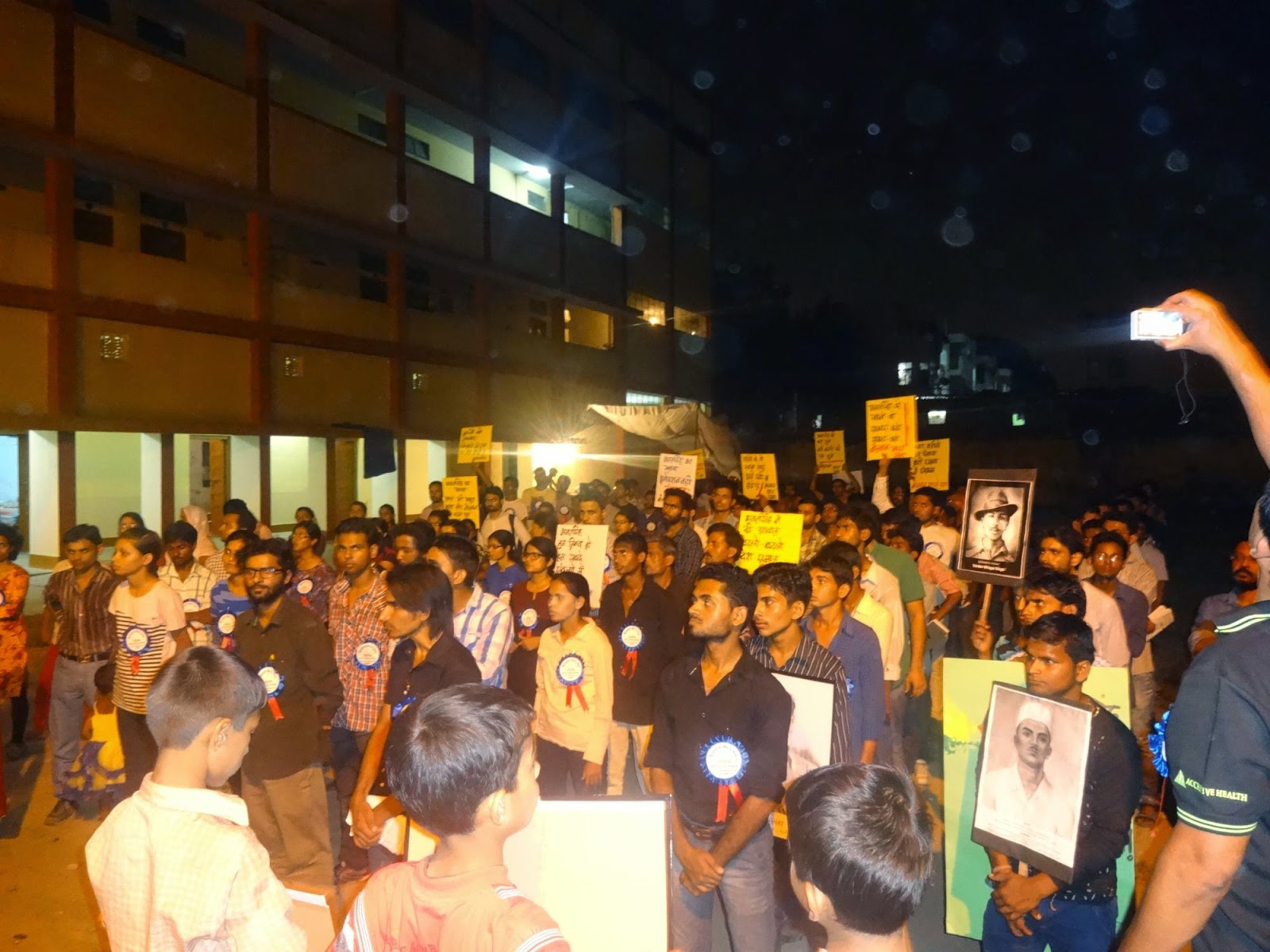 
It is to revive the spirit of revolution that the first national conference of Naujawan Bharat Sabha (NBS) was held on the occasion of the 107th birth anniversary of Bhagat Singh on 26-27-28 September at New Delhi’s Ambedkar Bhavan. There could not have been more opportune moment to organise the first national conference of an organisation which is inspired from the ideas of Bhagat Singh. It is to be noted that the name of the youth organisation which Bhagat Singh and his comrades had founded in 1926 in order to provide a new ideological base to the Indian revolutionary movement against the colonial slavery and to organise it afresh also happened to be Naujawan Bharat Sabha only. This name in itself symbolises the resolve to revive the great revolutionary legacy and to carry it forward.


The aim of Naujawan Bharat Sabha, a revolutionary youth organisation, is to unite the scattered youth movement of the country based on the understanding of correct orientation and to carry it forward as an integral part of the anti-imperial and anti-capitalist struggle of the masses. More than 150 elected delegates from Delhi, Haryana, Punjab, Uttar Pradesh, Bihar and Maharashtra participated in the first two days of the conference, which happened to be delegate sessions. On the third and final day of the conference, an open session was organised on the 107th birth anniversary of martyr Bhagat Singh in which around 300 people participated which included the sympathisers and supporters of NBS apart from the delegates.


The first session of the first day of the conference began with the flag hoisting ceremony. Subsequently Tapish Maindola presented a report on behalf of the convening committee. The report describes various mass agitations, propaganda campaigns and different cultural and creative activities being carried out under the leadership of NBS in last 10 years. The report mentions that this conference is being organised at a time when our country demands the brave, justice-loving and progressive youth to rise up yet again and to fulfill their historical duty.


In the second session of the first day, the draft manifesto and the draft constitution of NBS was presented which was followed by intense debate and discussion. The draft manifesto mentions that it is the responsibility of the youth who follow the ideals of Bhagat Singh that they unite themselves at grass root level and also organise the masses against the religious fundamentalist fascist forces while exposing the treachery of bourgeois politics. The manifesto and constitution were passed at the end of this session.


On the third and final day of the conference, the open session held on the ocassion of the 107th birth anniversary of Bhagat Singh began with the tribute to the martyrs. After this Abhinav, editor of students-youth magazine Ahwan, delivered his speech. Abhinav said that apart from education and employment for all, the NBS must also organise agitations on other democratic rights of the masses such as the health-care and housing so as to expose the capitalist system.