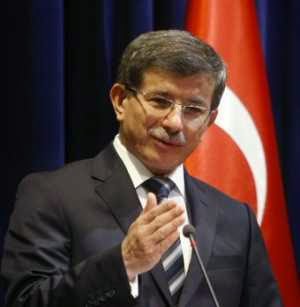 
Democracy and Class Struggle says whilst PKK fighters are what is needed to reinforce the YPG the Turkish Government is doing all  its power to only allow "approved" fighters to take on ISIS and undermine both the YPG and PKK influence in Kobane.

Turkish treachery knows no bounds has Davutoglu tries to increase Turkish influence in Kobane over the dead bodies of Kurdish YPG  fighters.

In fact Turkish delaying tactics was to ensure as many YPG dead in Kobane has possible before inserting Turkish friendly proxy forces like Free Syrian Army.

Long Live the Struggle of the YPG expose the treachery of the Turkish State.

In an interview with the BBC broadcast on Tuesday, Davutoglu called for an "integrated strategy" with the United States to equip and train the FSA and oust Assad from power.

He indicated that Turkey would only offer its air bases and other facilities for the international coalition fighting Islamic State (IS) if such a strategy were pursued.

The United States should "equip and train the Free Syrian Army so that if ISIS leaves, the regime should not come," he said.

Clearly  Ahmet Davutoglu  regards the Iraqi Peshmerga has part of the Iraqi army who he hopes to use against  PKK and YPG has they are political rivals in his plan to install Free Syrian Army in control of Kobane.

Turkish treachery against the Kurds continues.....


PS: Up to 200 Free Syrian Army fighters arrive in Kobane to help Kurdish defenders in the Syrian border town under siege from Islamic State militants.


A group of 150 Iraqi Kurdish Peshmerga fighters have arrived in Turkey from where they plan to cross into Syria to battle Islamic State (IS) militants besieging the town of Kobane.

One contingent flew from Iraq to a south-eastern Turkish airport.

Another contingent, carrying weapons including artillery, is travelling separately by land through Turkey.