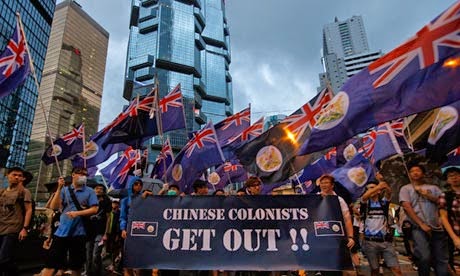 We support the demand of the people of Hong Kong for more democracy and directly electing the chief executive.

However we are also aware that the Hong Kong people are being used by their local Hong Kong capitalist oligarchs, supported by US and British Imperialism.

These local capitalist oligarchs who do not wish to lose out to the capitalist princeling pigs from the mainland and are rallying the Hong Kong masses to their cause.

We must expose this inter capitalist fight and promote the class struggle for socialism in Hong Kong.

We must promote the mass line and not populism

We oppose the populism of the Oligarchs and uphold the mass line of the democracy of the people.

The popular movement must fight neo liberalism and free market economy and not promote it has some in the Hong Kong populist movement do today.

Students carrying the old Hong Kong Flag with the Imperialist Union Jack at protests is a symptom of the confusion created by the likes of OTPOR Canvass and George Soros and Pierre Omidyar and their Hong King clones.

Chinese NGO operatives funded by the US National Endowment  for Democracy  and the National Democratic Institute should be excluded from any genuine people's movement.

Hong Kong Populists are trying to direct the people's movement towards capitalist imperialist ends rather than that of democracy and socialism and social justice.

We must firmly reject the house slave mentality of some Hong Kong Chinese towards Imperialism - we represent the Chinese anti imperialists led by our late Chairman Comrade Mao Zedong.

We must combat the enemy within, the Hong Kong Oligarchs as well the Bureaucrat capitalists from China.

The principal enemy is always at home.

We must expose the anti socialist, anti communist populism and promote democracy and class struggle not just for Hong Kong people but also for all China people who should have their mayors elected not appointed.

No to appointments by Beijing bureaucrat capitalists yes to Chinese mass democracy.

The People of China and Hong Kong should wage the same brotherly struggle against bureaucrat capitalism and neoliberalism .

That will not happen if the the Hong Kong democracy movement becomes a proxy for western imperialism - we need a mass line of democracy and class struggle in Hong Kong not populism.

The political idea of the mass line and mass democracy of Mao Zedong will outlast all his neo liberal critics.

Above all we need Marxism Leninism Maoism has our guiding ideology and leading light.

Statement from Democracy and Class Struggle

Hong Kong is facing its biggest political unrest in decades as tens of thousands of protesters defy a police crackdown to demand greater freedom from China.

The new round of protests began last week when thousands of college students launched a boycott to oppose China's rejection of free elections in 2017.

The protesters want an open vote, but China's plan would only allow candidates approved by Beijing. After a three-day sit-in, police used tear gas and pepper spray to disperse the crowds.

But that only fueled a public outcry which brought even more into the streets, with estimates reaching up to 200,000 people.

Protest leaders have vowed to remain until the resignation of Hong Kong city leader, Leung Chun-ying, and a free vote for his successor.

Originally organized by the group "Occupy Central," the protests have been dubbed Umbrella Revolution, for the umbrellas protesters have used to hide from the tear gas.

The police crackdown is the harshest since China re-took control of Hong Kong in 1997 after 150 years of British rule.

The crackdown is being felt in mainland China, where the government has blocked the mobile photo-sharing app Instagram and heavily censored references to Hong Kong on social media.