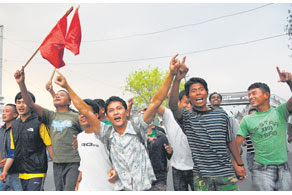 Demonstrators in Kathmandu yesterday against Chief of army Staff

KATHMANDU, April 22 - The Secretariat meeting of the ruling Unified CPN (Maoist) on Wednesday called President Dr. Ram Baran Yadav’s advice to Prime Minister Pushpa Kamal Dahal not to relieve the Chief of Army Staff from his duties as unconstitutional, and decided to launch a nation wide campaign to let the people know why the government sought clarifications from the Army Chief.

In the meeting held at the Prime Minister’s official residence in Baluwatar this morning, the Maoist Secretariat members discussed the president’s missive and said that Dr. Yadav went against the spirit of civilian supremacy while offering the advice to PM Prachandal. They claimed that the President has started posing himself as the executive head of the state, and thus breaching his limits.

On Tuesday, President Dr. Yadav sent a written advice to the PM asking the latter to stick to the political consensus and not to relieve the army chief from his duties going against the existing constitutional and legal provisions.
Posted by nickglais on 4/22/2009 06:26:00 AM