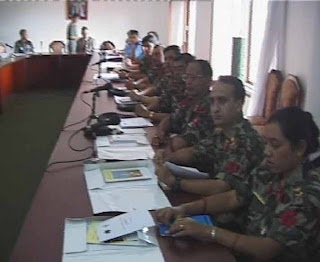 The army top brass has been divided to the extent of boycotting events participated by the other faction over the issue of possible action against incumbent Chief of Army Staff (CoAS) General Rookmangad Katawal, Annapurna post daily reported.

General Kul Bahadur Khadka, second man in the army hierarchy, has been boycotting all meetings as well as social functions participated by generals supporting the CoAS since the row surfaced.

Khadka was 'resting' at home when other generals were discussing their plan on Monday after the defense ministry sent a letter to the CoAS asking him to furnish clarification on some controversial issues. He has not attended any meetings of the generals after that.

Generals supporting the army chief have accused Khadka of trying to politicise the army by joining hands with the Maoists to sack the incumbent chief.

On the other hand, generals supporting Khadka have accused the army chief's supporters of blaming them without any evidence and discriminating against them.

Khadka is not invited in the informal meetings that take place in the army chief's residence. He was also not seen in a wedding party attended by most of the generals Wednesday evening.

Reports say army personnel have been deployed around Khadka's residence to monitor his movement after the row surfaced.

General Khadka is retiring coming Jestha 25. He can be the Chief of Army Staff only if the incumbent chief retires before that.

Khadka has a bitter relation with Katawal since a long time. Khadka has accused Katawal of correcting his age by a royal decree. A case related to the army chief's age is pending at the Supreme Court.
Posted by nickglais on 4/23/2009 02:07:00 AM