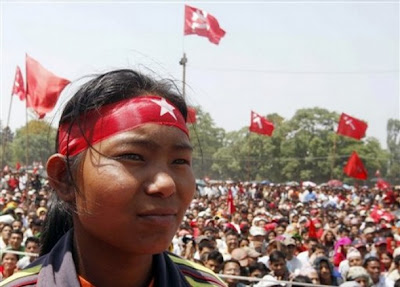 The Maoists party is preparing to gherao the entire Capital city come May 1, 2009, say fresh reports coming form the Maoists’ camp according to Nepal Telegraph.

The Maoists cadres from across the country have begun arriving in the capital to participate in the May 1-Workers Day.

“The May 1- Maoists’ rally will be the biggest of its own kind ever held in the capital”, say Maoists sources.

“Our major concern, on that day, will be to pressurize the government to restore Peoples’ Supremacy.”

On the other hand, the Nepal Army has instructed all its divisions spread in the five development region of the country to stay on high alert.

“The NA headquarters has also asked the Special Force of the Bhairab Nath Battalion to remain prepared to handle any untoward event”.

The Ranger Force of the Bhairab Nath Battalion, Maharajgunj, Kathmandu that was specially trained to fight against the Maoists at time of the Maoists’ led Peoples’ Revolt, are already in the state of alert.

The Ranger Force was trained on the Israeli and American style(Sniper Training).

Some Generals and high ranking officers have also been told to shorten their vacation and immediately show up at their respective divisions.


In the meantime, the Chief of the Army Staff Mr. Rukmangad Katwal had called a meeting with high ranking General of the Nepal Army at the NA headquarters.

“All those Generals who appeared in the Tuesday meeting are considered to be close to Mr. Katawal”, say sources.