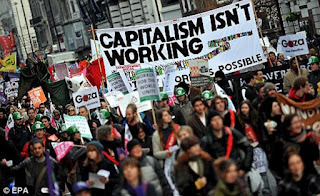 The man who died during last week's G20 protests was "assaulted" by riot police shortly before he suffered a heart attack, according to witness statements received by the Independent Police Complaints Commission.

Investigators are examining a series of corroborative accounts that allege Ian Tomlinson, 47, was a victim of police violence in the moments before he collapsed near the Bank of England in the City of London last Wednesday evening. Three witnesses have told the Observer that Mr Tomlinson was attacked violently as he made his way home from work at a nearby newsagents. One claims he was struck on the head with a baton.

Photographer Anna Branthwaite said: "I can remember seeing Ian Tomlinson. He was rushed from behind by a riot officer with a helmet and shield two or three minutes before he collapsed." Branthwaite, an experienced press photographer, has made a statement to the IPCC.

Another independent statement supports allegations of police violence. Amiri Howe, 24, recalled seeing Mr Tomlinson being hit "near the head" with a police baton. Howe took one of a sequence of photographs that show a clearly dazed Mr Tomlinson being helped by a bystander.

A female protester, who does not want to be named but has given her testimony to the IPCC, said she saw a man she later recognised as Tomlinson being pushed aggressively from behind by officers. "I saw a man violently propelled forward, as though he'd been flung by the arm, and fall forward on his head.

"He hit the top front area of his head on the pavement. I noticed his fall particularly because it struck me as a horrifically forceful push by a policeman and an especially hard fall; it made me wince."

Mr Tomlinson, a married man who lived alone in a bail hostel, was not taking part in the protests. Initially, his death was attributed by a police post mortem to natural causes. A City of London police statement said: "[He] suffered a sudden heart attack while on his way home from work."

But this version of events was challenged after witnesses recognised the dead man from photographs that were published on Friday.

An IPCC statement was due to be released the same day and is understood to have portrayed the death as a tragic accident. However, the statement's release was postponed as the complaints body received information that police officers may have been more involved in events than previously thought. An IPCC spokesman said yesterday that in light of new statements it was "assessing" the information it had received before deciding whether to launch a full investigation.

Part of the commission's inquiries will involve the examination of CCTV footage from the area.

Liberal Democrat MP David Howarth said: "Eventually there will have to be a full inquest with a jury. It is a possibility this death was at police hands."

A police source told the Observer that Mr Tomlinson appears to have become caught between police lines and protesters, with officers chasing back demonstrators during skirmishes. He was seen stumbling before he collapsed and died on Cornhill Street, opposite St Michael's Alley, around 7.25pm.

At around 7.10pm, protesters had gathered outside the police cordon to call for those contained inside - some for hours - to be let out. Officers with batons and shields attempted to clear them from the road.

Around 7.20pm, five riot police, and a line of officers with dogs, emerged from Royal Exchange Square, a pedestrian side street. Three images taken around this time show Mr Tomlinson on the pavement, in front of five riot police, and in apparent distress. He had one arm in the air, and appeared to be in discussion with the officers.

Mr Tomlinson then appears to have been lifted to his feet by a bystander. Minutes later he fell to the ground. "We saw this guy staggering around," said Natalie Langford, 21, a student. "He looked disorientated. About five seconds later he fell, and I grabbed my friends to help him."

Police have claimed that when paramedics tried to move Mr Tomlinson away for urgent treatment, bottles were thrown at them by protesters. He was later pronounced dead at hospital.

Branthwaite added: "He [Mr Tomlinson] was not a mouthy kid or causing problems, but the police seemed to have lost control and were trying to push protesters back. The police had started to filter people into a side street off Cornhill. There were a few stragglers who were just walking through between the police and protesters. Mr Tomlinson was one of those."

The police tactics during the G20 protests were condemned in the aftermath of the demonstrations. The clearance of a climate camp along Bishopsgate by riot police with batons and dogs after nightfall on Wednesday came in for particular criticism.