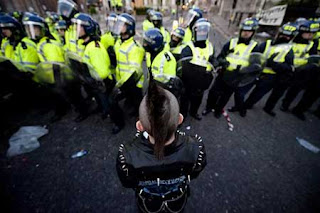 The number of arrests made by British police during Wednesday's citywide G20 London summit protests has risen to 63, police said

A man has died in a day of anti-capitalist demonstrations in the City of London.Police said they found the victim in a street by the Bank of England, where he had fallen down and stopped breathing at around 7.30pm.

We received a 999 (emergency) call at 7.24pm from a member of the public reporting that a man had fallen over and was unconscious, but was breathing," said the London Ambulance Service.

"At 7.30 pm we were informed by the police that a man at the location had stopped breathing."

Ambulance staff "made extensive efforts to resuscitate him both there and on the way to hospital", she said

The Independent Police Complaints Commission has been called in to investigate.