Katawal should have been sacked without second thought: DPM Gautam 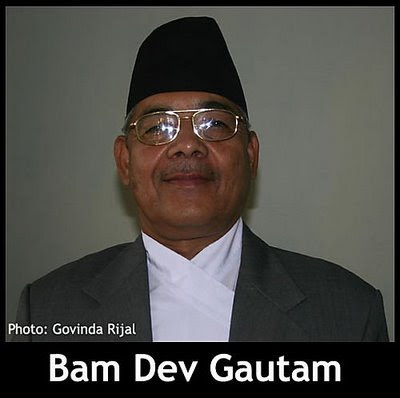 Deputy Prime Minister and Home Minister Bam Dev Gautam said Prime Minister should not have delayed taking action against Chief of Army Staff Rookmangud Katawal.
Speaking at a function in Lalitpur Saturday, Gautam said there is no point allowing Katawal to continue working in the same position when he disobeys orders of an elected government. He also alleged Kawatal of trying to run a parallel government.
He said it would be akin to reinstating monarchy to allow Kawatal to continue as army chief.Gautam, who is the vice chairman of CPN (UML), also claimed that conspiracies are being hatched to begin direct military rule in the country.

Maoist leader Barsha Man Pun claimed that Katawal has put obstacle to the ongoing peace process and expressed doubt over the success of peace process due to 'non- cooperation' from Nepal Army when preparations are being made for army integration.
Secretary of CPN (UML) Shankar Pokharel opposed the idea of sacking Katawal saying that action taken without fulfilling due procedures would not consolidate civilian supremacy.
Posted by nickglais on 4/25/2009 01:04:00 PM