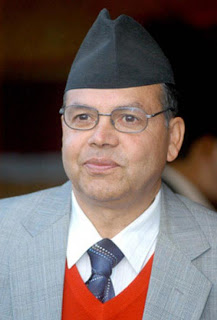 CPN-UML chairman Jhala Nath Khanal has said that though it has become increasingly necessary to “discipline the Army”, it is not the time to meddle in its affairs just now.

Khanal, who hastily arrived in Kathmandu Thursday morning cutting short his week-long visit to China after the government’s decision to seek clarification from the army chief gave rise to a serious political stalemate, argued that keeping in view the ongoing peace process, it is advisable to give priority to the main task that lies ahead – that of taking the peace process to its logical conclusion - rather than “tampering with the Army”.

Upon being asked by journalists at Tribhuvan International Airport (TIA) whether his party had given prior consent to the government to take action against the Nepal Army chief Rookmangud Katawal, the UML leader gave a cryptic response, saying that his party will make public its view on this row only after holding discussion with leaders of his own party as well as that of others.

Talking about his shortened China visit, he said that China wants to establish a new kind of relationship with Nepal. He didn’t elaborate.

Immediately after the arrival of Khanal, UML is expected to hold serious discussion within the party to come up with its position on the CoAS row.

Khanal is also scheduled to meet Prime Minister Prachanda and other party leaders to find a political consensus on the issue of Army chief.

However, if Home Minister and senior UML leader Bam Dev Gautam is to be believed, UML has already decided to back the cabinet decision to seek clarification from General Katawal, but is “still to study the Army Chief’s clarification”.

But UML General Secretary Ishwor Pokharel said at a meeting of political parties Wednesday that the government should take a consensus decision on the issue, but in a manner that “is seen as protecting the national army”.

Chairman Jhala Nath Khanal including top UML leaders Gautam and Pokharel are said to be in favor of relieving the army chief from his post, while former party boss and senior leader Madhav Kumar Nepal and KP Oli, one of the contender to the post of the party chairman and a staunch Maoist critic, are strongly opposed to the Maoist government’s move, calling it a ploy to humiliate Nepal Army and weaken democracy.

Madhav Kumar Nepal also mediated between Maoist leaders, PM Prachanda and President Yadav all day Wednesday to find a political consensus before deciding on the fate of Army chief.

Democracy and Class Struggle has not said many good words to say abut Jhala Nath Khanal but today is an exception has he has clearly put himself in the camp of civilian supremacy and distinguished himself as a true democrat who wishes to bring the Nepalese Army under democratic control.

It is one of the ironies of history that those that raise the volume in denouncing totalitarianism in Nepal are the ones for military supremacy and this lesson will not be lost either in Nepal or the wider world.
Posted by nickglais on 4/23/2009 12:41:00 AM