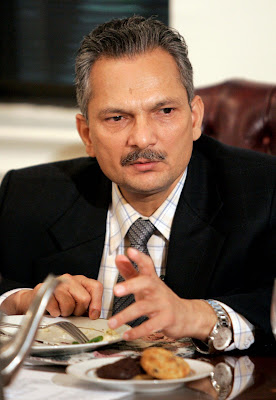 Finance Minister Dr Baburam Bhattarai has on Monday warned that the Chief of Army Staff (CoAS) would be sacked if he failed to furnish clarification for defying a series of government orders.

The Maoist-led government has already asked general Katawal to produce clarification for recruitment of 3010 soldiers, reinstatement of the eight retired brigadier generals sans the approval of the Defence Ministry and boycotting the National Games by 10 am Tuesday.

Dr Bhattarai, who is also a senior leader of United CPN (Maoist), told media persons in Nepalgunj that if the CoAS failed to defend himself against the charges for "grossly" defying the government orders, he would be relieved of his duty.

The rebel-turned-minister also accused CoAS Katawal and few other Army generals of mocking the people's sovereignty by going against the law and the constitution.
Posted by nickglais on 4/20/2009 10:48:00 PM