30,000 anti NATO protestors take to the streets of Strasbourg 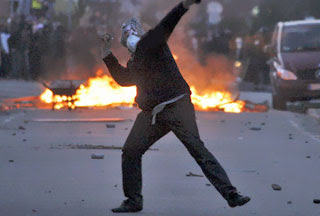 NATO demonstrators torched a former border post on the French side of the Franco-German frontier as protests took a violent turn.

Members of the “black block” so called because of their black clothes and hoods wrecked the outpost.

An Ibis hotel in Strasbourg was also set alight as hundreds of demonstrators also burned tyres, smashed shop windows and ransacked a petrol station and a pharmacy.

Police say that as many as 30,000 protestors took to the Strasbourg streets with around 1,000 bent on confrontation and destruction.

While on the German side of the Rhine 7,000 gathered but were prevented from crossing the river into France.

As a result Michelle Obama and other first ladies of NATO leaders were advised to cancel a visit to a cancer hospital as around 1,000 demonstrators were staked out in Strasbourg’s historical centre.

Some 15,000 German police and 9,000 French officers are on call for the summit and helicopters are buzzing the skies tracking the protestors movements.

Visit : Democracy and Class Struggle Television
http://www.mogulus.com/democracyandclassstruggle
Posted by nickglais on 4/04/2009 11:12:00 AM