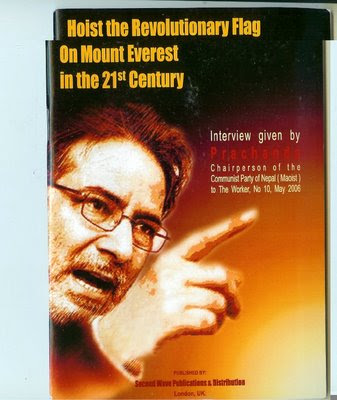 Come to a meeting to discuss Developments in Nepal and the Stakes for the Communist Movement, the Exchange of Letters between the RCPUSA and the CPN Maoist

Digging deeply into this two line struggle and in particular the exchange of letters between these two parties is serious and necessary revolutionary work. This two-line struggle requires an approach which comprehends the life and death stakes of its outcome. The following topics will be the focus of discussion:

The need to establish a new state led by the proletariat and its communist vanguard, as opposed to a strategy centering on participating in, and what amounts
to "perfecting, " the reactionary state (minus the monarchy, in the case of Nepal).

The need to establish in the case of Nepal, as the first step upon the overthrow of the old order, a new democratic state which would undertake the development of the economic base and corresponding institutions of the nation free from imperialist domination and feudal relations, based on new production and social relations brought forward through the course of the People's War, as opposed to establishing a bourgeois republic which focuses on developing capitalism and finding a place within the world imperialist network.