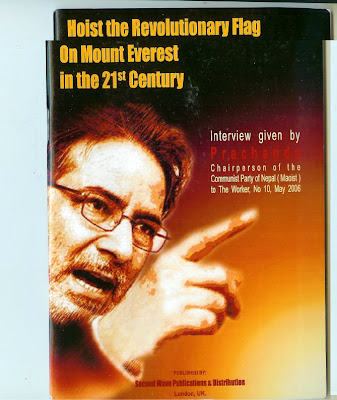 This quote from Mao Tse Tung, taken from the Communist Party of China (CPC) textbook stands to truth today:

"Class struggle in the society inevitably has its reflection inside the Party, and it appears in a concentrated fashion in the form of the two-line struggle within the Party - this is also an objective law. The reason why there can be no doubt that class struggle in society has its reflection in the Party is that our Party does not live in a vacuum, but in a society in which classes exist, and it is possible for bourgeois ideology, the force of old habits and international revisionist trends of thought to affect and poison our Party organism. Moreover, imperialism and social-imperialism make use of every possible channel in their attempts to overthrow our state of the dictatorship of the proletariat, and therefore they seek by every means to secure agents within our Party. It is always possible that people in our Party will let themselves be corrupted by the enemy, will let themselves degenerate to the point of becoming agents of the class enemy. The ten big two-line struggles which our Party has gone through in the course of its 50 year history have all been reflections inside the Party of the class struggle on the national and international levels...."

Though the Unified Communist Party of Nepal (Maoist) does not have state power at present, this line struggle is nevertheless of great importance and will contribute to some degree the successful outcome of the Revolution in Nepal.

By all means Comrades, discuss the 2ls on the kasama site and Maoist Revolution though organise meetings, debates away from the limitations of cyber world. We also stress like our Comrades in the US have done, ensure the 2ls takes place in a Comradely fashion and where all antagonisms are reduced.

This way and due to facts that these meetings have been publicly declared, can we ensure that the enemy line does not penetrate our ranks, cause confusion and sow the revisionist line deeper.

We look forward to your participation!

Come to a meeting to discuss Developments in Nepal and the Stakes for the Communist Movement, the Exchange of Letters between the RCP - USA and the CPN Maoist

Digging deeply into this two line struggle and in particular the exchange of letters between these two parties is serious and necessary revolutionary work. This two-line struggle requires an approach which comprehends the life and death stakes of its outcome. The following topics will be the focus of discussion:The need to establish a new state led by the proletariat and its communist vanguard, as opposed to a strategy centering on participating in, and what amounts to "perfecting, " the reactionary state (minus the monarchy, in the case of Nepal).

The need to establish in the case of Nepal, as the first step upon the overthrow of the old order, a new democratic state which would undertake the development of the economic base and corresponding institutions of the nation free from imperialist domination and feudal relations, based on new production and social relations brought forward through the course of the People's War, as opposed to establishing a bourgeois republic which focuses on developing capitalism and finding a place within the world imperialist network.The dynamic role of theory and two-line struggle.

Discussion on the dynamic role of theory and two-line struggle (struggle within communist parties and among communists generally over questions of ideological and political line), vs. eclectics, pragmatism and attempts to rely on "tactical finesse" and what amounts to bourgeois realpolitik: maneuvering within the framework of domination by imperialism (and other major powers) and the existing relations of exploitation and oppression.The full text of the exchange of letters is available at: www.revcom.us (or www.rwor.org )

100 Flowers Cultural Centre, above 24 Stoke Newington Road, Dalston, N16 (entrance on the side)