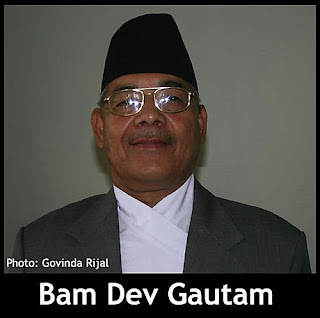 Deputy Prime Minister and Home Minister Bam Dev Gautam has said government sought clarification from army chief for his defiance to the orders given by the 'civilian government'.

Inaugurating the general convention of Commercial Banks Employees Association in Butwal on Thursday, Gautam claimed that the government's move is constitutional and added that it was given political colour by opposition parties.

He said Nepal Army defied government orders for three times - by not halting new recruitment, withdrawing from the National Games and calling back the generals who were given retired notice without government decision.

He said Nepal Army and other government agencies are to obey what cabinet orders but have no authority to define which is right or wrong.

Reiterating that government is committed to rule of law, Gautam claimed opposing government's move to seek clarification from Kawatal is intended to invite military coup in the country.
Posted by nickglais on 4/23/2009 03:56:00 AM