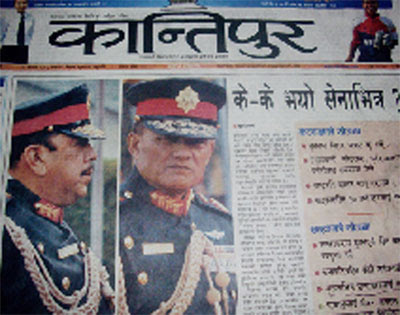 In recent months the military has repeatedly proved either unwilling or unable to take directives from the civilian government and especially from the Ministry of Defence headed by the Maoist Ram Bahadur Thapa Badal.

There have been multiple controversies from the (ex-royal) Nepal Army. Firstly, in February the National Army recruited several thousand soldiers against the orders of the Government, the Defense Ministry, the supreme court and the Interim Constitution. The army again challenged the civilian government when it reinstated 8 generals who where retired by the defense ministry on March 16th, and finally recently staged a political boycott of the National Games went the Peoples Liberation Army of the Maoists were allowed to compete.A military that repeatedly undermines the popularly elected government is an obviously enormous threat to democracy, especially in a developing nation like Nepal.

Thus for the ongoing security and prosperity of Nepal it is essential that the military be restructured and brought back under the control of the legitimately elected civilian government.

The creation of the New Nepal will also require the National army to be reconstructed and realigned to match the new reality of the new Nepali state. The Nepali Army has changed only in name from when it was previously the Royal Nepali Army, and has backed an anti-democratic coup to reinstate absolute royal rule in 2005

The retirement of the head of the Army, the Chief of Army Staff would be the first step in a process of creating the democratic new Nepali Army, and is thus essential for the ongoing peace, progress and democratic rule in Nepal. This is the core of the current issues around the army, the creation of new state structures in Nepal.

The sacking of the Chief of Army Staff should not be seen as a political question. The politics is obvious and beyond doubt- the chief of the Army has put himself outside of civilian control and therefor should be removed. The basis of the opposition to these moves is motivated instead by the question of power. People in positions of state power in Nepal, be it in the bureaucracy, in the judiciary and in the military, feel threatened by the process of change. The political opposition has no common politics, but unites those within the fabric of the old society to prevent the cultivation of the new.

Resistance to change in the military is the struggle of those who are rich and powerful who see the military as their armed gang to insure against radical change.However Nepal has shown repeatedly in its recent history that the real power in a society doesn' society.

There has been many demonstrations everyday by Maoist supporters calling for the retirement of the Chief of Army Staff, and these demonstrations coupled with the by-election results has put beyond doubt that the popular sentiment is behind the government and desires change.