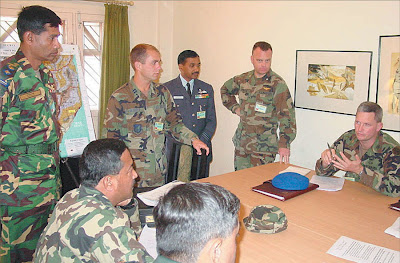 Picture Nepal Army and US advisors

Friday, the past reputation returned to haunt the Nepal Army four years later with the country’s biggest media house accusing them of having planned a second coup this month, which however was not executed due to India and other powerful donor governments.

The front-page reports in Kantipur, Nepal’s largest circulated daily, and its sister publication the Kathmandu Post drew an immediate response from the army , which rejected them as "fabricated, false and baseless".

The two dailies claimed to have senior army officers’ take on the "soft coup" that was to have taken place early Wednesday morning. They described a plot that was "like a page from a nail-biting thriller": "Maoist leaders, ministers and other selected individuals would be arrested" while former king Gyanendra be put in "line arrest" in the Nagarjuna Palace, his residence since his exit from the Narayanhity palace last June.

The plotters also planned to "cut off" Maoist Prime Minister Prachanda Prachanda, opposition leader Girija Prasad Koirala and a number of other leaders from the public and encircle Singhadurbar, Nepal’s cluster of ministries, Baluwatar, the official residence of Prachanda, offices of the Maoists’Young Communist League and other associations, and the 28 cantonments where the Maoists’ People’s Liberation Army combatants have been confined since the signing of the peace pact in November 2006.

However, the conspirators said they would not harm the PLA fighters who would be allowed to go home or abroad while the UN officers monitoring the camps would be escorted back to Kathmandu.

However, the Nepal Army headquarters in Kathmandu issued a strong rebuttal, calling the reports "a well-planned conspiracy to create a rift between the government and the army". "The army remains united, disciplined and under a chain of command," the army statement said. "It is dedicated to protecting the independence, sovereignty and territorial integrity of the motherland and national unity."

Democracy and Class Struggle says Kantipur Daily and Kathmandu Post are no friends of the UCPN Maoist or the Government of Prachanda and the fact that they have chosen to break this story shows the profound threat to democracy posed by the unreformed Nepalese Army which is a proxy for foreign interests and not a patriotic army to defend Nepal and democracy like the PLA.

However the source of the Kathmandu Post and Kantipur report was senior officers in he Nepal Army who put the interests of democracy and nation ahead of serving proxy foreign interests - true Nepali patriots who bring hope to Nepal and democrats around the world.
Posted by nickglais on 4/24/2009 05:19:00 AM