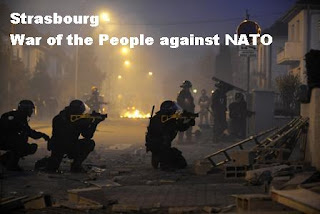 The rioting was centered on the French side of the Bridge of Europe -- a road link over the river Rhine which connects France with Germany.

The bridge is 5 km (3 miles) from a summit center where 28 NATO leaders, including U.S. President Barack Obama, were meeting.