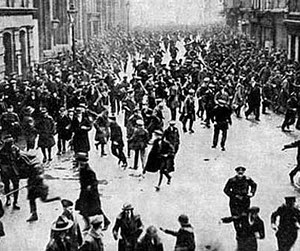 Democracy and Class Struggle on November 11th honours the miltant working class struggle of those who brought the First World War to an end.

We salute our working class brothers in Kiel and Wilhemshaven in Germany who raised the  Red Flag , we are proud that the  Red Flag was hoisted on the patrol ship Kilbride at Milford Haven in our country Wales and for French comrades of the Black Sea Fleet raising the red flag of solidarity with our Russian brothers and sisters.

A magnificent demonstration of what Chairman Mao Zedong reminds us that people and the people alone are the motive force of history.

Despite November 11th being the last day of the war, on many parts of the Western Front fighting continued as normal. This meant, of course, that casualties occurred even as the people of Paris, London and New York were celebrating the end of the fighting.

The slaughter of World War One would only be ended some four years later by the wave of military mutinies and revolution that swept across Europe.

By 1918 even the establishment in London feared revolution, as Adam Hochschild revealed

"At times the writers of these confidential Weekly Intelligence Summaries sounded as if they, like the Bolsheviks, expected revolution to sweep across Europe.

“There is scarcely a community or group of people in England now,” reported a gloomy officer of the London District Command in early 1918,

“among whom the principles of Socialism and extreme democratic control are not beginning to be listened to with ever increasing eagerness. . . . There is no gathering of working people in the country which is not disposed to regard Capitalism as a proven failure.”

Of preparations being taken against a possible revolution in Britian Hochschild adds "Four Royal Navy battleships, for example, were stationed in the Thames estuary, for no visible military purpose.

Still more revealing, at the beginning of 1918 there were roughly 1.5 million soldiers in Britain itself.

After taking into account troops in Ireland, in training, recovering from wounds, underage for overseas service, or serving in antiaircraft units, Millman calculates that this still left 175,000 fully trained extra troops on army bases at home.

Contingency deployment plans showed them being sent, if need be, to districts adjacent to, but not actually within, areas of trade union militancy, such as Scotland’s River Clyde.

Millman suggests that this would have put soldiers close enough to be rushed in for strikebreaking duties, but not so close that, when off duty, they could mingle at local pubs or soccer fields with the very people whose strikes they were breaking, who might remind them of the old socialist saying that a bayonet was a weapon with a worker at each end.

In July 1918, a month of many strikes, the boundaries of British military command districts were redrawn to coincide with those of national police districts.

The authorities secretly drew up lists of people who, when the order was given, were to be imprisoned."


To End All Wars: A Story of Protest and Patriotism in the First World War

13 years of Mutiny in British Navy to Invergordon in 1931

Mutiny in the German Navy at Kiel and Wilhemshaven