A Poet of Nameless Horrors by Dora Montefiore 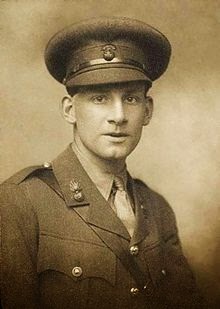 Absolute sincerity is the keynote to this collection of poems inspired by the present war. No writer can, any more than can any painter, give a picture of a battle because they are each of them able only to reproduce their impressions or recollections of that corner of the fight in which they were engaged; but modern trench warfare—with its dreary, dragged-out monotony of attacks and counter-attacks, sniping, gas-clouds, drum-fire, and existence in dug-outs and funk-holes—lends itself to bald and crudely sincere writing in a way that no other warfare has ever done. The soul of Siegfried Sassoon was wrenched awry by the passion of pity he felt for the men who had to face, day by day, under his command the nameless horrors to which politicians and statesrnen have for the last four years been exposing them.

“Mutinous I cried
To those who sent them out into the night.
The darkness tells how vainly I have striven
To free them from the pit where they must dwell
In outcast gloom convulsed and jagged and riven
By grappling guns. Love drove me to rebel.
Love drives me back to grope with them through hell;
And in their tortured eyes I stand forgiven.”

We all know the history of Sassoon’s very noble rebellion, and we pulse with the thought that it has not been in vain. Militarism, which is the modern expression of capitalism, is still in the saddle and riding recklessly to its appointed doom; but its trampling heels shall not for ever crush the peoples of the earth, and the poet voices, among whom flashes the tongue of scorn and irony of Sassoon, shall count among the forces that will destroy for ever the old ideal of life being a competitive struggle on the physical plane, and shall ring in the newer ideal of its emerging on that plane as a co-operative brotherhood, with the struggle removed to the spiritual plane of a struggle for higher and nobler life.

Sassoon in his vision of the future hears:

“The Yellow-Pressmen grunt and squeal;
And with my trusty bombers turned and went
To clear these junkers out of Parliament.”

His haunting “Survivors,” brought vividly back to my mind the months I worked in 1915-16 in the war-zone of the French Army just behind the Arras trenches. In, a hospital “depot” accommodating 600 men were collected the sick (not the wounded), who week by week were drafted out of the mud-logged trenches west of Arras, and were returned in drafts, week by week, to stand up once again against the accumulated long-drawn tortures which trench fighting in winter entails. There in this dreary barrack yard crawled about for a few weeks’ rest the men and boys with trench-feet, skin-diseases, shell shock, and syphilis; then came round the weekly necessity of making up the numbers of the returning draft; the bugle sounded the fatal summons, and out into the daylight straggled unwillingly, in patched-up uniforms and cleaned accoutrements, the half-healed men who had been chosen as once more "fit" for trench service.

“No doubt they’ll soon get well: the shock and strain
Have caused their stammering; disconnected talk.
Of course they’re longing to go out again:—
These boys with old, scarred faces, learning to walk,
They’ll soon forget their haunted nights; their cowed
Subjection to the ghosts of friends who died, -
Their dreams that drip with murder; and they’ll be proud
Of glorious war that shattered all their pride…
Men who went out to battle, grim and glad;
Children, with eyes that hate you, broken, and mad.”

This was written October, 1917. Are the peoples of the world still going to allow in October, 1918, “their dreams to drip with murder”? Let the answer come swiftly; and let “the trusty bombers” act.

REVOLUTION AND RELIGION
The Fight for Emancipation and the Role of Religion
A Dialogue Between
Cornel West & Bob Avakian
Saturday November 15
London, England

This is a very important dialogue, between two eminent thinkers, Bob Avakian and Cornel West. Everyone with an interest in revolution should be there.