India : 24th November 2011- 2014 Kishenji Lives in the heart of proletarians and oppressed people in the world 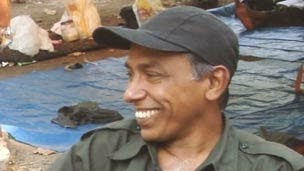 Our CPI Maoist CC is appealing to the people of the country to observe protest week
from November 29 to December 5 and observe 48-hour "Bharat Bandh" on
December 4-5 in protest of the brutal murder of Comrade Koteswara Rao aka Kishenji.

We are appealing that they take up various programmes like holding meetings,
rallies, dharnas, wearing black badges, road blocks etc protesting this
murder.

We are requesting that trains, roadways, commercial and educational
institutions be closed and that all kinds of trade transactions be stopped
as part of the "Bharat Bandh" on December 4-5.

However, we are exempting medical services from the Bandh.

Varavara Rao '' He did enormous work in keeping aloft the importance of
People's War and in taking the revolutionary politics into the vast masses.

November 24, 2011 would remain a black day in the annals of Indian revolutionary movement's history.

The Fascist Sonia-Manmohan-Pranab-Chidambaram-Jairam Ramesh ruling clique who have been raising a din that CPI (Maoist) is "the biggest internal security threat", in collusion with West Bengal chief minister Mamata Banerjee, killed Comrade Mallojula Koteswara Rao after capturing him alive in a well planned conspiracy.

This clique which had killed Comrade Azad, our party's spokesperson, on July 1, 2010 once again spread its dragnet and quenched its thirst for blood.

Mamata Banerjee, who had shed crocodile tears over the murder of Comrade Azad before coming to power, while enacting the drama of talks on the one hand after assuming office, killed another top most leader Comrade Koteswara Rao and thus displayed nakedly its anti-people and fascist facet.

The central intelligence agencies and the killer intelligence
agencies of West Bengal and Andhra Pradesh chased him in a well planned
conspiracy and killed him in a cowardly manner in a joint operation and now
spreading a concocted story of encounter. The central home secretary R.K.
Singh even while lying that they do not know for certain who died in the
encounter, has in the same breath announced that this is a big blow to the
Maoist movement. Thus he nakedly gave away their conspiracy behind this
killing. The oppressed people would definitely send to grave the exploiting
ruling classes and their imperialist masters who are daydreaming that they
could wipe out the Maoist party by killing the top leadership of the
revolutionary movement.

Comrade Koteswara Rao, who is hugely popular as Prahlad, Ramji, Kishenji and
Bimal inside the party and among the people, is one of the important leaders
of the Indian revolutionary movement. The tireless warrior who never rested
his gun while fighting for the liberation of the oppressed masses since the
past 37 years and who has laid down his life for the sake of the ideology he
believed in, was born in 1954 in Peddapally town of Karimnagar district of
North Telangana, Andhra Pradesh. Raised by his father the late Venkataiah,
who was a freedom fighter, and his mother Madhuramma who has been of
progressive views, Koteswara Rao imbibed love for his country and its
oppressed masses since childhood. In 1969, he had participated in the
historic separate Telangana movement while he was in his high school studies
in Peddapally town.

He joined the revolutionary movement with the inspiration of the glorious Naxalbari and Srikakulam movements while studying graduation in SRR college of Karimnagar. He started working as an active member of the Party from 1974. He spent some time in jail during the black period of the Emergency. After lifting up of the Emergency, he startedworking as a party organizer in his home district of Karimnagar He responded to the "Go to Villages" campaign call of the party and developed relations with the peasantry by going to the villages. He was one of those who played a prominent role in the upsurge of peasant movement popular as "Jagityal Jaitrayatra" (Victory March of Jagityal) in 1978. In this course, he was elected as the district committee member of the Adilabad-Karimnagar joint committee of the CPI (ML). In 1979 when this committee was divided into two district committees he became the secretary of the Karimnagardistrict committee.

He participated in the Andhra Pradesh state 12th party conference, was elected to the AP state committee and took responsibilities as its secretary.Up to 1985, as part of the AP state committee leadership he played a crucial role in spreading the movement all over the state and in developing the North Telangana movement which was advancing with guerilla zone perspective.He played a prominent role in expanding the movement to Dandakaranya (DK)and developing it. He was transferred to Dandakaranya in 1986 and took up responsibilities as a member of the Forest Committee. He led the guerrilla squads and the people in Gadchiroli and Bastar areas of DK. In 1993 he was co-opted as a member into the Central Organizing Committee (COC). From 1994 onwards he mainly worked to spread and develop the revolutionary movement in Eastern and Northern parts of India including West Bengal.Particularly his role in uniting the revolutionary forces which were scattered after the setback of the Naxalbari movement in West Bengal and in reviving the revolutionary movement there is extraordinary. He mingled deeply with the oppressed masses of Bengal and the various sections of the revolutionary camp, learnt the Bangla language with determination and left an indelible mark in the hearts of the people there. He worked tirelessly in achieving unity with several revolutionary groups and in strengthening the party. Comrade Koteswara Rao was elected as a Central Committee (CC) member in the All India Special Conference of the erstwhile CPI (ML) (People's War) held in 1995. He strived for achieving unity between People's War and Party Unity in 1998. In the Party Congress of the erstwhile CPI (ML)(PW) held in 2001 he was once again elected into CC and Politburo. He took up responsibilities as the secretary of the North Regional Bureau (NRB) and led the revolutionary movements in Bihar, Jharkhand, West Bengal, Delhi, Haryana and Punjab states. Simultaneously he played a key role in the unity talks held between erstwhile PW and MCCI. He served as a member of the unified CC and Politburo formed after the merger of the two parties in 2004 and worked as a member of the Eastern Regional Bureau (ERB). He mainly concentrated on the state movement of West Bengal and continued as the spokesperson of the ERB.


Comrade Koteswara Rao played a prominent role in running party magazines and
in the field of political education inside the party. He took part in
running Kranti, Errajenda, Jung, Prabhat, Vanguard and other party
magazines. He had a special role to play in bringing out various
revolutionary magazines in West Bengal. He wrote many theoretical and
political articles in these magazines. He was a member of the Sub-Committee
on Political Education (SCOPE) and played a prominent role in teaching
Marxism-Leninism-Maoism to the party ranks. In the entire history of the
party he played a memorable role in expanding the revolutionary movement, in
enriching the party documents and in developing the movement. He
participated in the Unity Congress-9th Congress of the party held in 2007
January, was elected as CC member once again and took responsibilities of
Politburo member and member of the ERB.

The political guidance given by Comrade Koteswara Rao to the Singur and
Nandigram people's movements which erupted since 2007 against the
anti-people and pro-corporate policies of the social fascist CPM government
in West Bengal and particularly to the glorious upsurge of people's
rebellion in Lalgarh against police atrocities is prominent. He guided the
West Bengal state committee and the party ranks to lead these movements and
on the other hand conducted party propaganda through the media too with
initiative. In 2009 when the Chidambaram clique tried to mislead the middle
classes in the name of talks and ceasefire, he worked significantly in
exposing it. He did enormous work in keeping aloft the importance of
People's War and in taking the revolutionary politics into the vast masses.
This great revolutionary journey which went on for almost four decades came
to an abrupt end on November 24, 2011.

Do condemn this brutal murder. It is the conspiracy of the ruling classes to
wipe out the revolutionary leadership and deprive the people of correct
guidance and proletarian leadership. It is a known fact that the Maoist
movement is the biggest hurdle to the big robbers and compradors who are
stashing millions in Swiss banks by selling for peanuts the Jal, Jungle and
Zameen of the country to the imperialist sharks. The multi-pronged,
country-wide brutal offensive named Operation Green Hunt of the past two
years is exactly serving this purpose. This cold-blooded murder is part of
that. It is the duty of the patriots and freedom-loving people of the
country to protect the revolutionary movement and its leadership like the
pupil of their eye. It's nothing but protecting the future of the country
and that of the next generations.

Even at the age of 57, Com. Koteswara Rao led the hard life of a guerilla
like a young man and had filled the cadres and people with great enthusiasm
wherever he went. His life would particularly serve as a great inspiration
to the younger generation. He studied and worked for hours together without
rest and traveled great distances. He slept very little, led a simple life
and was a hard worker. He used to mingle easily with people of all ages and
with people who come from various social sections and fill them with
revolutionary enthusiasm. No doubt, the martyrdom of Comrade Koteswara Rao
is a great loss to the Indian revolutionary movement. But the people of our
country are very great. It is the people and the people's movements which
gave birth to courageous and dedicated revolutionaries like Koteswara Rao.
The workers and peasants and the revolutionaries who have imbibed the
revolutionary spirit of Koteswara Rao right from Jagityal to Jungle Mahal
and who have armed themselves with the revolutionary fragrance he spread all
over the country would definitely lead the Indian New Democratic Revolution
in a victory path. They would wipe out the imperialists and their lackey
landlord and comprador bureaucratic bourgeoisie and their representatives
like Sonia, Manmohan, Chidambaram and Mamata Banerjee.

Our CC is appealing to the people of the country to observe protest week
from November 29 to December 5 and observe 48-hour "Bharat Bandh" on
December 4-5 in protest of the brutal murder of Comrade Koteswara Rao. We
are appealing that they take up various programmes like holding meetings,
rallies, dharnas, wearing black badges, road blocks etc protesting this
murder. We are requesting that trains, roadways, commercial and educational
institutions be closed and that all kinds of trade transactions be stopped
as part of the "Bharat Bandh" on December 4-5. However, we are exempting
medical services from the Bandh.

Statement from Democracy and Class Struggle on killing of Comrade Kishenji :

His struggle continues by members of People's Liberation Guerrilla Army (India) (That partially was the same name and partially PLA of MCCI and CPI ML(People's War) before these two party (along with CPI ML PU) united and formed the Maoist party of India (CPI Maoist). Other groups have later joined as well. Kishenji's role in uniting those parties through democratic relations and criticism and self criticism was one of the greatest services of him historically