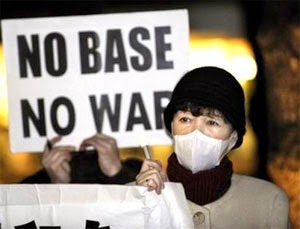 Residents of Japan's Okinawa Sunday elected a governor who opposes plans to relocate a US military base within the island chain, a fresh setback in efforts to resolve a thorny issue in military relations.
Voters in the southern prefecture chose Takeshi Onaga over the incumbent Hirokazu Nakaima, Kyodo News agency reported, citing the local election board in Okinawa.
Kyodo described the victory as a "landslide" win for Onaga, who secured 360,820 votes to incumbent Nakaima's 261,076, according to Okinawa's local election board.
Onaga's apparent victory is a significant blow to the central government because the governor can veto the landfill work needed for a new base to be built.
In his first comments, the 64-year-old indicated he would do just that.