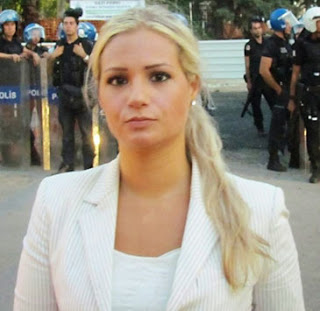 
American journalist of Lebanese descent, Serena Shim has been killed in a car accident in Turkey. She was reporting from the Turkish-Syrian border near Kobani and was returning after doing a report on Kobani when her car collided with a truck. The identity and the whereabouts of the truck driver remains a mystery.

On October 17, Shim told Press TV that the Turkish National Intelligence Organization (MİT) had accused her of "spying".[5] She stated that it is “probably due to some of the stories she had covered about Turkey’s stance on the Islamic State of Iraq and the Levant militants in Kobanê”.[6] She had reported that ISIL militants being smuggled over the Turkish border into Syria on trucks bearing the symbols of NGOs like the "World Food Organisation". Shim, said on air she's "a bit frightened" by what MİT "might use against me."[3]


Democracy and Class Struggle while it does not endorse Press TV we call for an international journalists investigation into the killing of Serena Shim - a month of silence since her death is unacceptable.

Her brave exposure of Turkish / ISIS collaboration is also important politically has it undermines the Western narrative about Turkey and the West and ISIS.

Turkey reflects rogue state governance. It's a NATO member. Part of Washington's war on Syria. Partnering with US crimes.

"If confirmation was required that a neo-Ottoman Turkey is determined to reassert (its regional) influence gained 700 years before and lost a century ago and…doing so as part of a campaign by self-christened global NATO to expand into the Arab world, the Turkish head of state's threat to militarily intervene in Syria with the support of its 27 NATO allies should provide it."

Reporters Without Borders calls Turkey the world's largest prison for journalists for good reason. Press freedom is verboten. It's nonexistent.