New York City Police Commissioner William Bratton, right, is seen after having fake blood thrown on him during demonstrations in Times Square. 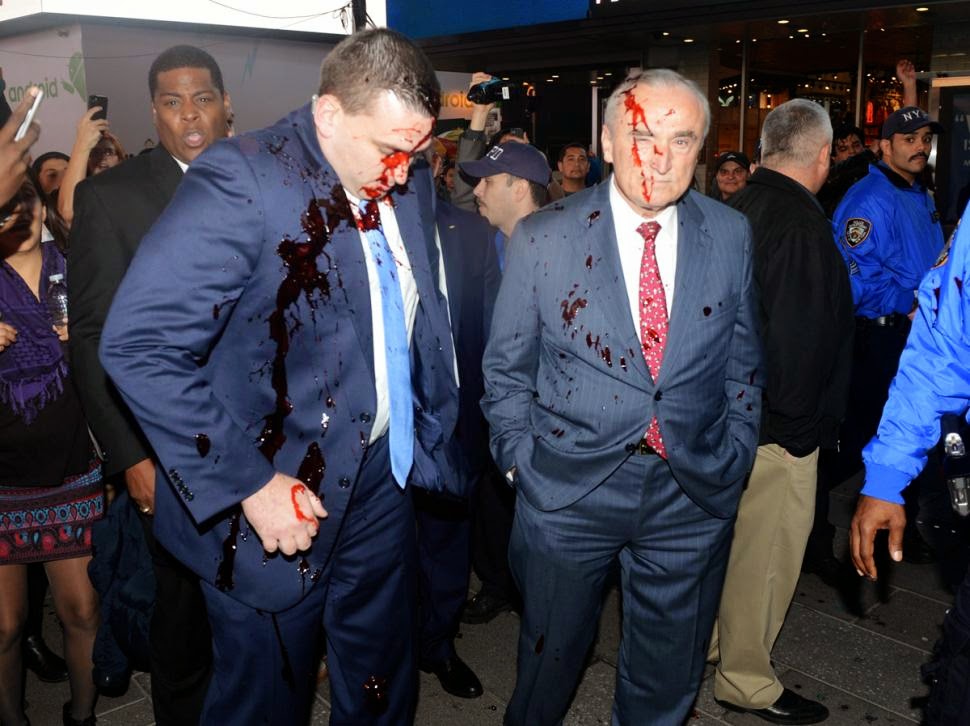 The Blood of the System they will never wash off - Time for Justice for Michael Brown
See Also:
http://democracyandclasstruggle.blogspot.co.uk/2014/11/carl-dix-of-rcpusa-wilson-has-walked.html
http://democracyandclasstruggle.blogspot.co.uk/2014/11/ferguson-indict-their-system-turn-anger.html?spref=fb
http://democracyandclasstruggle.blogspot.co.uk/2014/11/michael-brown-grand-jury-decision-no.htmlger.html
A reporter from Revolution Newspaper briefly hijacked Missouri Governor Jay Nixon‘s Ferguson press conference tonight to ask about whether a lack of indictment would mean “fear for black people all over this country” and about the Revolutionary Communist Party’s response.
Nixon was taking questions from the press when this reporter, identifying himself as Revolution Newspaper’s Larry Everest, jumped in and shouted, “You need to let the alternative press speak here.”

He asked, “Wouldn’t a lack of indictment mean fear for black people all over this country and objectively a green light for further police violence?”


“If Darren Wilson walks, America must be brought to a halt. That means no business as usual. It means blocking streets and walking out of schools. It means we refuse to accept this.”