Lecturing Ferguson? Again, are communists rebels or not? by Eric Ribellarsi 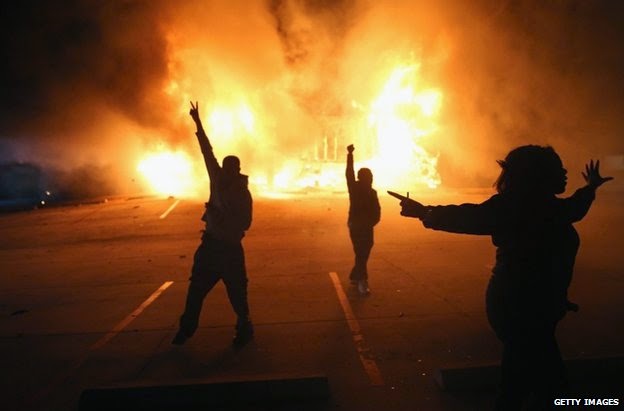 With every great uprising, rebellion, and revolution of this planet’s people, it has been painful to watch those of the Left who have stood to the side, complaining about this or that aspect. In practice, despite what they say, they focus their main outrage at the righteous uprisings of the people, even more so than the system.

Years ago, Kasama featured a polemic from Greece titled “Are Communists Rebels or Not?” At the time, the Communist Party of Greece was denouncing the rioting and rebellions in Greece in the name of “the real popular revolt.” Today, thousands of new young militants have come into political life with a profound hatred of that organization as a result. Despite waves of radical resistance, that organization has had very little to do with the class struggle of the recent years.

On this site (KASAMA), a similar kind of post appeared last night (before being toned down, but holding onto the same basic formulations). It claimed:

“Rebellion is right, but it is not revolution. The rebellion in Ferguson has inspired all who care about human liberation. But street fighting is not the same as revolution and we need to turn the righteous anger of Black youth into disciplined revolutionary organization.”

No shit. Also, a teenager is not an adult. Jets are not spaceships. Dating is not a committed relationship. What is the point of statements like these?

What value is there to juxtaposing revolution against righteous resistance and rebellion, other than to promote scholastic disdain for the people who are throwing their lives into the real struggle of the people?

Many rebellions are the initial sparks of revolutionary movements. Most are not. Why is it seen as the task of communists to lecture people over this difference literally the night of the uprisings?
The article continues:


“Some sincere people would have the idea that what is needed is to spread the rebellion in Ferguson to other parts of the country. Theirs is the mistaken belief that the key thing that is needed right now is more Fergusons, more riots.

While the spread of rebellions in several urban Black suburban neighborhoods could have a positive effect on the consciousness and fighting spirit of the people, such rebellions alone will not, by themselves, lead to liberation.”

In fact, if this country is not in rebellion and uprising for a long time to come, it will solidify that Black life is worth nothing and that it is perfectly legal to lynch Black people. This is a life and death political battle that is worth fighting for, including if it never leads to revolution. Resistance matters. What value is there in denouncing that?


“Some revolutionary-minded people have put out calls for nationwide action with the hopes of spreading rebellion in the neighborhoods where they are. Is this the key thing that communists should be doing? Do communist networks exist with real ties to the people so that such calls can have the desired effect? If not this call for action, then what?”

Seas of people are in rebellion right now. Thousands upon thousands of people are fighting, putting their lives on the line. Mass resistance is not dependent upon some decades old entrenched social base. Who mobilized the network of the LA rebellion? Or the Watts rebellion? These things have a popular character among the people that (fortunately) runs far ahead of the consciousness of the condescending advice of the Left.
The article continues:


"What Ferguson exposes is the urgent need for communist organization."

So, fire your ideas, hire mine? Perhaps Ferguson also demonstrates how far ahead of the Left the people already are. They have learned through wave upon wave of resistance: from Oscar Grant, to Trayvon Martin, to Mike Brown, and a thousand others who were murdered. And there has been a cumulative awakening and anger, regardless of the work of communists. Perhaps it is time we shut up and listen.

Who could forget November 15th, 2011, when the Occupy movement was brutally crushed by the police, and every dogmatist tried to march out and denounce the movement. Kasama’s own post-eviction Occupy event was disrupted by dogmatist fools shouting “we need a worker’s party!” The line presented here is no different.

It is good that a toned down and revised version of this article was released, but that article unfortunately holds to the same themes. It centers its argument on "Rebellion is right, but it is not Revolution"  (a heading in the article), and it continues with platitudes like: "Street-fighting alone, however, is not itself the same thing as making revolution" and it does not remove "What Ferguson exposes is the urgent need for communist organization." It is simply wrong to issue these kinds of platitudes the night of the Darren Wilson verdict in Ferguson, even if they contain truth in an abstract sense.

Our love for the people requires a determined partisanship with the movement of the people. We should not frame ourselves as the judges of the people's actions in the way this revised article does when it says "It's encouraging to see people challenging officially-approved channels of 'nonviolent' protest."

We should be humbled, listen, learn, and fight alongside our brothers and sisters. And once we've learned from the people, perhaps then we will have a much more meaningful and profound contribution to make.

In the history of our communist movement, a similar debate once emerged in the Chinese revolution, repeatedly as history would show. Speaking of this great struggle, Mao Tse-tung wrote:


“The present upsurge of the peasant movement is a colossal event. In a very short time, in China's central, southern and northern provinces, several hundred million peasants will rise like a mighty storm, like a hurricane, a force so swift and violent that no power, however great, will be able to hold it back. They will smash all the trammels that bind them and rush forward along the road to liberation. They will sweep all the imperialists, warlords, corrupt officials, local tyrants and evil gentry into their graves. Every revolutionary party and every revolutionary comrade will be put to the test, to be accepted or rejected as they decide. There are three alternatives. To march at their head and lead them? To trail behind them, gesticulating and criticizing? Or to stand in their way and oppose them? Every Chinese is free to choose, but events will force you to make the choice quickly…


From the middle social strata upwards to the Kuomintang right-wingers, there was not a single person who did not sum up the whole business in the phrase, "It's terrible!" Under the impact of the views of the "It's terrible!" school then flooding the city, even quite revolutionary-minded people became down-hearted as they pictured the events in the countryside in their mind's eye; and they were unable to deny the word "terrible". Even quite progressive people said, "Though terrible, it is inevitable in a revolution." In short, nobody could altogether deny the word "terrible"…


In a few months the peasants have accomplished what Dr. Sun Yat-sen wanted, but failed, to accomplish in the forty years he devoted to the national revolution. This is a marvelous feat never before achieved, not just in forty, but in thousands of years. It's fine. It is not "terrible" at all. It is anything but "terrible". "It's terrible!" is obviously a theory for combating the rise of the peasants in the interests of the landlords; it is obviously a theory of the landlord class for preserving the old order of feudalism and obstructing the establishment of the new order of democracy, it is obviously a counterrevolutionary theory.


No revolutionary comrade should echo this nonsense.


If your revolutionary viewpoint is firmly established and if you have been to the villages and looked around, you will undoubtedly feel thrilled as never before. Countless thousands of the enslaved--the peasants--are striking down the enemies who battened on their flesh. What the peasants are doing is absolutely right, what they are doing is fine! "It's fine!" is the theory of the peasants and of all other revolutionaries.”