Ukrainian History Forgotten : The Donbass : Donetsk and Lugansk vote in 1994 for Federalisation 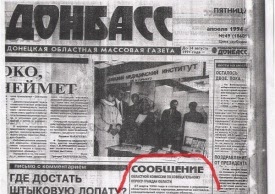 Democracy and Class Struggle says in view of western media hostility to autonomy referendums in Lugansk and Donetsk today it is worth recalling a history which has been erased from 1994 of a similar vote for Federalisation that was not protested by the West but suppressed by the Kiev Government  who declared it illegal.

20 years ago the most important event which few people remember. Amazingly, the fact is that in 1994 in the Donetsk and Lugansk regions held a referendum on the status of these regions, the Russian language in them and question of integration.

20 years ago it all Donbass supported by an absolute majority federalisation, but these results are not something that were enforced - not even remembered !

On the Internet, there is hardly a word.

In 1994, the Internet was not yet a force, and when it appeared, after poverty of the 90s this event already forgotten.

Besides the Kiev regime imposed taboo on any talk of federalization, and even more so on long time held  referendum.

But in the Donetsk and Lugansk regions parallel with the referendum was held, during which were to determine the ratio of the Donbas to the status of the Russian language, the state system of Ukraine.

1. " Do you agree that the Constitution of Ukraine consolidated land-federative structure of Ukraine? "

results in the Donetsk region:

3 . " Do you agree with the fact that on the territory of Donetsk (Luhansk) region of language, records and documentation, as well as education and science was the Russian language along with Ukrainian? "

That's expressed Donbass in 1994 That's why Kiev regime so afraid of any referendum in the Donbass.

Instead pours false propaganda about the "unity and integrity." Although both can often be integrated?

In addition, the referendum results reveal the falsity of official data on the ethnic composition. According to him, in the Donetsk region resides: Russian - 38%, Ukrainians - 57%. In Lugansk - the same. And these "38% of Russian" provide a 90% support for Russian language?


Now is the time to recall the referendum results in 1994 in the Donbass! 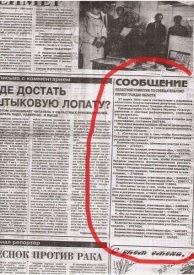 This is very interesting and useful information. Mainstream media ignores history even of the near past of 1994. Media promotes the lies of imperialism