INDIA: JOINT PROTEST DHARNA AGAINST THE ARRESTING OF G.N.SAIBABA 31ST MAY 2014 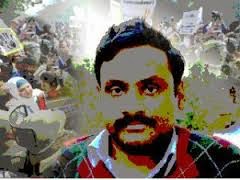 More than a dozen progressive and democratic organizations are organizing a Protest Dharna on 31st May, 2014 (11 AM to 2 PM) at Jantar Mantar, Delhi, against the arbitrary arresting of Prof. G.N. Saibaba by Maharashtra Police.

Through this united programme, we are also protesting state repression, going on different progressive and democratic movements.

We are demanding from the new central govt. to repeal UAPA and other draconian acts, which are being used frequently, against the struggling progressive and democratic forces of India.

We will submit a Memorandum to the Home Minister of India, consisting of all these demands. We, sincerely, appeal to you to join the Protest Dharna and extend your active support in the united struggle against ongoing state repression on people’s movements.