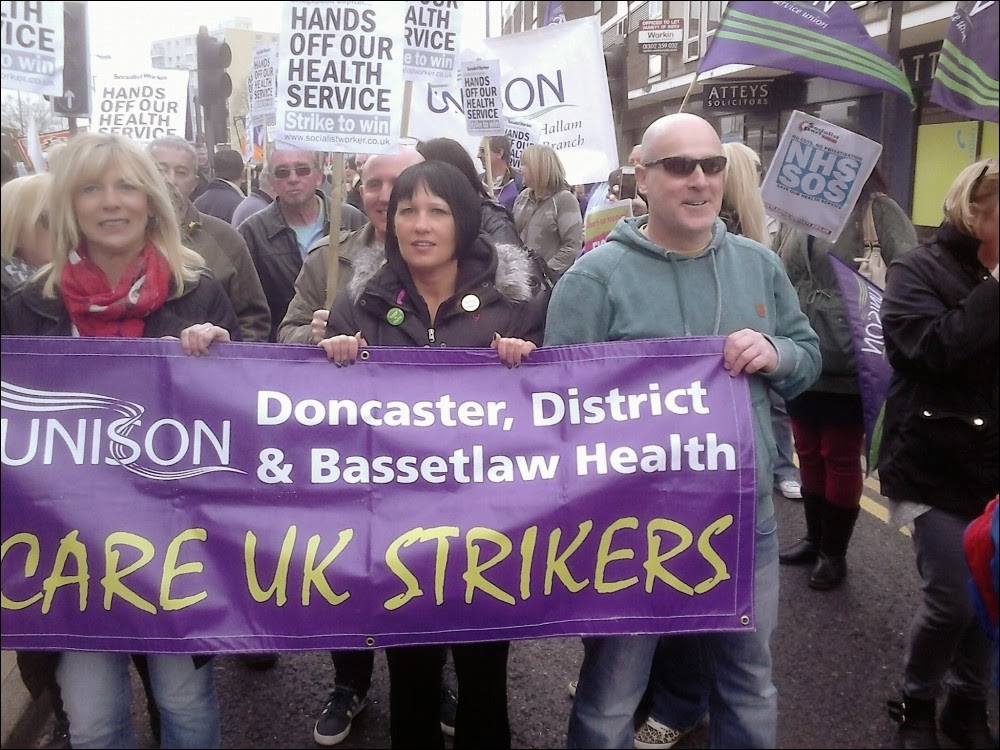 Care workers in Doncaster who help adults with learning difficulties are facing a massive attack on their wages and conditions of work since their service was privatised and taken over by Care UK, part of the multi-million pound Bridgepoint Corporation.  Care UK’s profits shot up to £11.9 million in 2013, a rise of 57%.  At the same time the care workers are threatened with pay cuts of up to £6,000  per year.

But these UNISON members are fighting back by taking repeated strike action. This is a crucial struggle for all care workers throughout Britain. If the CareUK workers win their dispute then other private sector care providers will be less likely to attack their employees.

It was Labour-controlled  Doncaster Metropolitan Borough Council which moved these carers over from the National Health Service to private company Care UK.  This change was in line with  the previous Labour Government’s Plan for the NHS.  Among other privatisation measures, this aimed to get employees off NHS contracts so that they could be paid less, a policy being carried through by the present Coalition Government.

Not one local council in the whole country has resisted the cuts.  All of them, including the Labour ones, have gone along with and vigorously enforced the Coalition Government’s austerity programme.  Councillors have refused to stand up for the people they are supposed to be representing.  They are too attached  to their generous allowances and will do nothing which might threaten their positions.

The trade unions have shown themselves to be ineffective  in protecting their members, especially in the public sector, from national and local government attacks on pay and pensions.  UNISON, which did not oppose the Labour Government’s marketization and privatisation policies, has proved to be particularly useless  at organising its members to take effective industrial action  Many trade union members have lost confidence in the unions and are leaving.

The truth is that most high level trade union officials and senior elected office holders have no stomach for the serious and concerted industrial action necessary to push back the state’s attacks on public employees.  The former have got too comfortable in their highly-paid positions while the latter are very happy with the time they get off work and other benefits.  These people won’t do anything which threatens their comfortable positions.

The bold strike action of the Doncaster Care UK workers shows the way forward.  Other public employees should follow their inspiring example.  It’s no good waiting for a lead from the TUC and union bureaucrats because it’s not going to happen.  It’s up to workers in their local branches to take initiatives in defending themselves from exploitative employers, both private and public.  “One spark can start a prairie fire.”

VICTORY TO THE CARE UK STRIKERS!