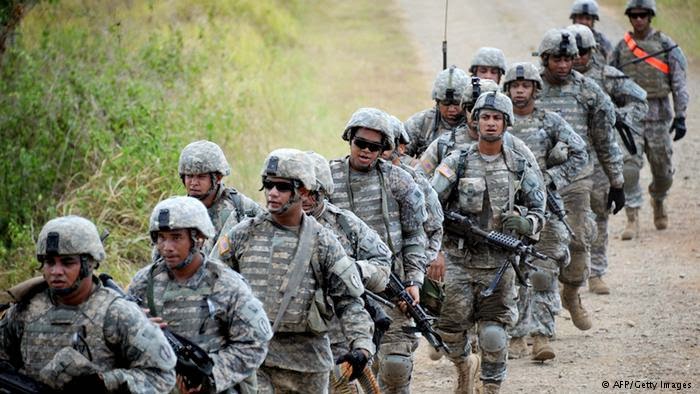 The Balikatan military exercises has long served as a cover for the US military to deploy its troops in the Philippines, build its communications infrastructure, conduct intelligence gathering operations, and allow US troops to be embedded in local counter-guerrilla combat operations.
MEDIA RELEASE
By CPP Information Bureau
05 May 2014


The Communist Party of the Philippines (CPP) today denounced the arrival of up to 3,000 US combat troops in the Philippines that are set to participate in the 30th Balikatan joint military exercises with the Philippine armed forces.


US troops and Armed Forces of the Philippines soldiers are set to conduct live fire exercises, amphibious maneuvers, and joint combat exercises over the course of the next 10 days in Pampanga, Tarlac, and Nueva Ecija provinces. A smaller contingent of American soldiers have also been deployed in Albay to conduct so-called "civic assistance activities", but are mostly intended to further strengthen US spy facilities in the area.

"The Balikatan military exercises has long served as a cover for the US military to deploy its troops in the Philippines, familiarize with the terrain, build its communications infrastructure, conduct intelligence gathering operations, deploy its war materiél, train the local armed forces to support US naval and aerial maneuvers, and allow US troops to be embedded in local counter-guerrilla combat operations."

"Claims that Balikatan exercises are geared towards strengthening capabilities for humanitarian and disaster response is a deceptive pretext for what in fact is the bigger objective of strengthening US military presence in the Philippines to serve the US pivot in Asia which aims to deploy as much as 60% of its overseas naval forces in the region,” added the CPP.

"The arrival of thousands of US troops and their warships and jetfighters highlight the continuing gross violation of Philippine national sovereignty and trampling of the country’s territorial integrity by the US military," said the CPP.


"This year’s Balikatan exercises is doubly reprehensible as it is being conducted just a week after the signing of the Enhanced Defense Cooperation Agrement (EDCA) last 28 April which has provoked widespread uproad for giving the US military unlimited rights to station its troops, equipment, vehicles, and weapons, in so-called Agreed Locations in the Philippines."


"The CPP enjoins the Filipino people to expose and demand an end to the annual Balikatan exercises which has allowed the US to establish its foothold in the Philippines and impose its hegemony in the country and the Asia-Pacific."


"The EDCA and the Balikatan exercises only serve the interests of the US military to further entrench itself in the Philippines and make use of the country as its base for its effort to control the trade routes in Asia, contain the growth of China, and pressure any country to accede to the US economic and political agenda."


"The puppet Aquino regime must be held responsible for the outright surrender of Philippine sovereignty in its effort to please its imperialist master in exchange for continuing political support."
Posted by nickglais on 5/06/2014 01:03:00 AM