Ukraine: Borotba launches campaign "Against the war in May" 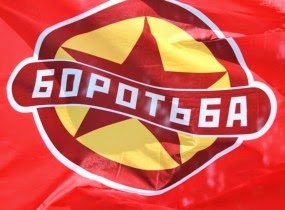 The death toll in the riots in Odessa provoked by  Right sector radicals and representatives of the so-called self-defense Maidan from Kiev, has reached 46 people. Prosecutor of Odessa region Igor Borshulyak told  reporters on Saturday.

"During the clashes and fire in the House of Trade Unions 46 people were killed, more than two hundred enlisted the help of health care providers. 20 of them  are the police. Eight people died from fall from height in the fire," said the prosecutor. It was also reported that the member of the local regional council Vyacheslav Markin of the Party of Regions died in a hospital.


On the night of May 2, the neo-Nazi Kiev junta ordered troops and units of the Ukrainian Security Service to attack rebels in Slavyansk (Donetsk region). Prior to this, anti-government activists have been arrested in many cities. The leaders of death squads openly say that they are looking just for a pretext to arrest activists of civil society organizations of the popular movement in Southeastern Ukraine.

The Kiev junta developed own tactics in order to suppress the protests of residents of South-East: it includes organized provocations with the help of neo-Nazi groups, football hooligans and far-right supporters.

Moreover it sends provocateurs of the Security Service and uses police from other regions (more loyal to the junta) so that to suppress the protests, to carry out provocations, for arrests and intimidation of people.

Since the using of the regular army in the Southeast didn’t led to the expected results, the junta begins to form nationalist units, platoons and battalions, thus legalizing the previously marginalized neo-Nazi groups and organizations.

Appointed by junta officials from Ukrainian oligarchy – recruit the so-called "Maidan Self-Defense" gangs and criminal elements (that pretend to be ‘militia’ or ‘civil control’) to serve at checkpoints.

At the same time, the junta carries out a disinformation campaign - igniting hysteria and chauvinism in the national media and completely distorting the information about the events in South-Eastern Ukraine.

The Kiev junta sees a way out of the crisis only in methods of brutal suppression and outright terror.

We declare that any attempt to organize repressions against our comrades will lead to mass indignation of the people of Southeastern Ukraine, who are ready to fight for their democratic rights.

Further destructive neoliberal policy of ‘reforms’ and escalation of confrontation within the society (pursued by the anti-social Kiev regime) will lead to the involving in conflict of ‘peace-keeping’ forces.

Moreover, it will transform the once peaceful country into a second Yugoslavia, torn by inter-ethnic slaughter and in result the pro-Western political and military governors will be imposed on the country.

In order to stop the "anti-terrorist operation” and support our comrades, we must come out to the streets!