Then..... the March 18 Convention was the signal for the peasant upsurge, which engulfed the entire area for four months. The U.F. government in West Bengal sought to diffuse the movement by announcing token land reforms. The revolutionary peasants replied to the revisionist rulers by setting up peasant committees to take over the land of the jotedars.

Huge processions and demonstrations were organised by Kisan committee members, many of whom were armed with lathis, spears, bows and arrows. A sea of red flags struck terror into the hearts of the landlords and the countryside reverberated with the slogan "March forward along the path of armed peasant revolution."

The first clash was ignited when a share-cropper, Bigul Kisan, was beaten by armed agents of a local jotedar. This was followed by violent clashes and the forcible seizure of land and confiscation of food grains, by armed units of the Kisan committee. Any resistance by the landlords and their gangs was smashed and a few killed.

By end May the situation reached the level of an armed peasant uprising. The CPI (M) leaders, who were now in power, first tried to pacify the leaders of the movement......having failed, Jyoti Basu, the then home minister of West Bengal, ordered in the police. On 23rd May the peasantry retaliated killing an inspector at Jharugaon village.

On May 25, in Naxalbari, the police went berserk killing nine women and children. In June the struggle intensified further, particularly in the areas of Naxalbari, Kharibari and Phansidewa. Firearms and ammunition were snatched from the jotedars by raiding their houses. People’s courts were established and judgments passed.

The upheaval in the villages continued till July. The tea garden workers struck work a number of times in support of the peasants. Then on July 19, a large number of para-military forces were deployed in the region. In ruthless cordon and search operations, hundreds were beaten and over one thousand arrested.

"Hundreds of Naxalbaris are smoldering in India....... Naxalbari has not died and will never die."

The Communist Party of China, then the centre for world revolution, hailed the uprising. On June 28, 1967 Radio Peking broadcast :

"A phase of peasants’ armed struggle led by the revolutionaries of the Indian Communist Party has been set up in the countryside in Darjeeling district of West Bengal state of India. This is the front paw of the revolutionary armed struggle launched by the Indian people......". Within a week, the July 5th edition of People’s Daily carried an article entitled ‘Spring Thunder over India’ which said : 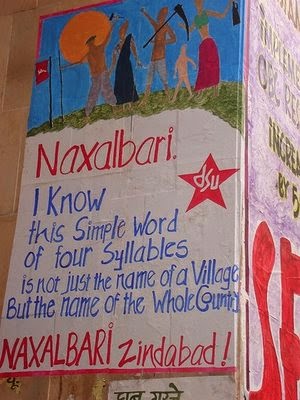 not bad. but why don't you also promote the revolutionary music of Bob Avakian, especially his hip-hop masterpiece 'All Played Out'.