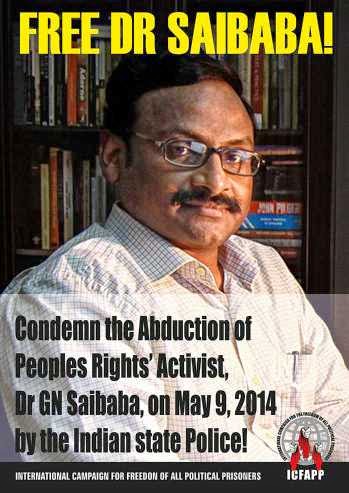 A representative of APCLC and a fellow of the Indian Council of Social Science Research (ICSSR) V Hargopal met former justice of Kerala High Court and current chairman of MSHRC, S R Bannurmath, in this regard on Monday.

According to friends of Saibaba, who was arrested by Gadchiroli police on May 9, the professor has even been denied vital high blood pressure and heart medicines by jail authorities. Hargopal , who teaches at the Tata Institute of Social Sciences (TISS) in Hyderabad and has worked with Saibaba in the past, said, “Police have kept Saibaba in an ‘anda’ (eggshaped) cell.

He is 90 per cent disabled and is wheelchair-bound and requires assistance even for his daily chores. For the past four days, he has not been given vital medicines, which can be dangerous for his health. I have requested the MSHRC chairman to intervene.”

Saibaba, who teaches English at Delhi’s Ram Lal Anand College and is the joint secretary of Revolutionary Democratic Front (RDF), had been accused of hatching a criminal conspiracy with two Naxalite commanders, Narmadakka and Ramdhar, who are supposed to be operating deep in the forests of Gadchiroli.

Jagdish Meshram, Saibaba’s lawyer, said, “A warrant against Saibaba was issued by Gadchiroli police on February 26, but I fail to understand why they arrested him now.

He has been remanded in magisterial custody till May 23. Earlier, police had raided his home twice.” Speaking to Mirror from Delhi, Vasantha, wife of Saibaba, said, “On Friday, I received a call from my husband around 1.15 pm telling me he is coming home for lunch.

But later, I received a call informing me that police have arrested him. I registered a missing person complaint at Maurice Nagar police station, and an hour later, the SHO told me that four Maharashtra police officials produced a non-bailable warrant against my husband on Friday morning. Now, our lawyer will suggest the further course of action.”

Ramdev, brother of Saibaba who lives in Nagpur, told Mirror, “Jail authorities are not allowing us to meet him. He had a cardiac arrest two years ago for which he takes regular medicine, but they are not even giving him those.”
Posted by nickglais on 5/14/2014 02:28:00 PM