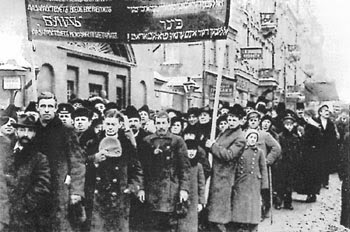 Democracy and Class Struggle is publishing this note of Lenin's on The Bund to show that the charge of Bundism levelled against the Black Workers Congress was false in 1970's and a repetition of the charge against the Yr Aflonyddwch Mawr by the RCPUSA is also false has neither organisation in the past or present seeks to be the "sole" representative of the Afrikan or Welsh proletariat.

Bob Avakian is famous for saying the truth will get us to communism - then stop
lying so we can bring that day nearer and recognise your own errors yesterday and today.

Among the various representatives of Marxism in Russia the Jewish Marxists, or, to be more exact, some of them—those known as the Bundists—are carrying out a policy of separatism. From the history of the working-class movement it is known that the Bundists left the Party in 1903, when the majority of the party of the working class refused to accept their demand to be recognised as the “sole” representatives of the Jewish proletariat.


This exit from the Party was a manifestation of separatism deeply harmful to the working-class movement. But, in fact, the Jewish workers have entered and continue to enter the Party everywhere in spite of the Bund.

From the history of Marxism in Russia we know, further more, that when the Bund in 1906 again returned to the Party, the Party stipulated the condition that separatism should cease, i.e., that there should be local unity of all the Marxist workers of whatever nationality. But this condition was not fulfilled by the Bundists, despite its special confirmation by a special decision of the Party in December 1908.[1]

That, shortly, is the history of Bundist separatism in Russia. Unfortunately, it is little known to the workers, and little thought is given to it. Those having the closest practical acquaintance with this history are the Polish, the Lithuanian (especially in Vilna in 1907) and the Latvian Marxists (at the same time, in Riga), and the Marxists of South and Western Russia; It is well known, incidentally,   that the Caucasian Marxists, including all the Caucasian Mensheviks, have until quite recently maintained local unity and even fusion of the workers of all nationalities, and have condemned the separatism of the Bundists.

We should also note that the prominent Bundist, Medem, in the well-known book, Forms of the National Movement (St. Petersburg, 1910), admits that the Bundists have never implemented unity in the localities, i.e., they have always been separatists.

In the international working-class movement, the question of separatism came to the front most urgently in 1910, at the Copenhagen Congress. The Czechs came forward as separatists in Austria, and destroyed the unity that had existed previously between the Czech and German workers. The International Congress at Copenhagen unanimously condemned separatism, but the Czechs have unfortunately remained separatists right up to the present.

Feeling themselves isolated in the proletarian International, the Czech separatists spent a long time searching unsuccessfully for supporters. Only now have they found some—in the Bundists and liquidators. The &chat;echoslavische Sozialdemokrat, the bit of a journal published by the separatists in German, printed an article in its issue No. 3 (Prague, April 15, 1913) under the title “A Turn for the Better”. This “turn” that is supposed to be for the “better” (actually, towards separatism) the Czech separatists saw—where do you think, reader? In Nasha Zarya,[2] the liquidators’ journal, in an article by the Bundist V. Kosovsky!

Only that complete unity (in every locality, and from top to bottom) of the workers of all nations, which has existed so long and so successfully in the Caucasus, corresponds to the interests and tasks of the workers’ movement.


[2] Nasha Zarya (Our Dawn)—a Menshevik liquidator monthly published legally in St. Petersburg from 1910 to 1914. It served as a rallying centre for the liquidationist forces in Russia.

I strongly suggest that Nick Glais properly acquaint himself with Avakian's writings before attacking them. in particular, this article refers to Bundism

and pay careful attention to this:
"Now, on the other hand, we had to struggle against people whom (drawing from the history of the Russian Revolution) we came to call Bundists, within our own ranks and more broadly in the revolutionary movement of that time, in particular the BWC (the Black Workers Congress) and the PRRWO (the Puerto Rican Revolutionary Workers Organization, which emerged from the Young Lords Party). They were basically arguing that the nationalism of an oppressed people or nation is bound to be revolutionary and that revolutionary nationalism is essentially identical with proletarian ideology. And we came up with a formulation that really infuriated them [BA laughs], partly because it was sort of deliberately provocative: we said all nationalism is...nationalism, and all nationalism is ultimately bourgeois ideologically."
Bob Avakian was right!, then and now. I don't believe Nick Glais has ever really tackled BA's own writings or the New Synthesis, but is attacking something in order to defend his own bourgeois nationalist project, which is frankly 'all played out'.

Marx was right Avakian was wrong when at at a meeting of the First Interationall,Marx ridiculed the idea that nationalism was an antiquated prejudice advanced by Paul Lafargue in French language a language which nine tenths of the audience did not understand.LoL

Nick Glais continues to deliberately misunderstand Avakian. Avakian was not at the meeting of the First International, so I don't see the meaning of that comment. Also, what was true in the era of competitive capitalism, that nationalism has progressive characteristics, is not true in the era of monopolistic capitalism, where nation states are already fully developed. Marx and Engels also thought that it would be possible to get to socialism in countries like the UK because of parliamentary institutions. However, obviously, this is not possible, especially in the era of imperialism. Quoting Marx to justify one's own revisionism is very easy to do.

i would like to ask Nick Glais if he believes the Ltte struggle in Sri Lanka was a proleterian struggle? or that of the Basque seperatists? or is it a fact that these movements are 'all played out'?


Lenin clarified this question for those socialists who sought to counterpose the fight for "pure socialism" to the national struggle and who had contempt for national independence and sovereignty.Lenin said :

On the question of Sri Lanka we do not support the bourgeois nationalism of the LTTE or the Singhalese Maoist Party that follows your revisionist line. The MLM party in Sri Lanka has to stand for he right of self determination of the Tamil people and oppose the current land grab by the Singhalese state of Tamil land.We support the creation of a multinational MLM party in Sri Lanka to lead road to national and social liberation.

Concerning the struggle in the Basque country - we support the Basques people's right to self determination.

What revisionists fail to grasp is that that Britain, France and Spain were created has states from internally colonising own native nationalities long before they went on to become Imperial Empires. English colonial policy in Wales 400 years later was applied in India but revisionists like Avakian are blind to this fact.

The nationalities in the periphery of Europe will rise up and smash the imperial parasitic centres of London, Paris and Madrid has part of the process of making socialist revolution - the only thing that is played out is Avakianism which fails to recognise its own errors and historic missed opportunity in the 1970's to build a truly multinational communist party in the USA because of its sectarianism.In a previous post on article by Mike Hamlin someone describes how the RCPUSA has been in decline since 1975 to which we add if you had only devoted half the time to self critical analysis of your own movement in the United States you would not be in the state you are today - all played out.

"The RCP USA is a strong powerful party that is respected across the world..."

This statement is astonishing in its delusional distance from basic reality.

The RCP,USA is a small and crumbling cult. Its biggest day (membership-wise) was the day it was founded in 1975 (with around a thousand membvers) and it has shrunk steadily for forty years.

It is now no longer a national presence, only having active cadre in a smaller and smaller number of cities.

It is in a permanent financial crisis --so that fundraising is the only activity of its aging and often dazed members. I expect they will stop publishing a naitonal newspaper soon (having more and more abandoned a supposedly "weekly" schedule). And it has dropped its smaller bookstores, and will probably lose its flagship store in New York.

Saddest of all, its remaining few dozen cadre are more and more burned out -- looking like classic cult members. Repeating memorized phrases, looking vacant eyed and even disheveled. And with very few under fifty (younger people "come around" for brief periods of time, but are over and over and over repulsed by the ugly cult of personality that defines the RCP now). They have not had any naitonal youth formation since the RCYB shattered after the emergence of the full cult of personality.

They are isolated, and considered a joke by virtually everyone in the world... with very few exceptions. (And those exceptions are overwhelmingly people with zero contact with the actual RCP, or basis for evaluating its actual "work").

It is now a permanent fundraising machine for its central figure... with no public discussion of where those funds actually go.