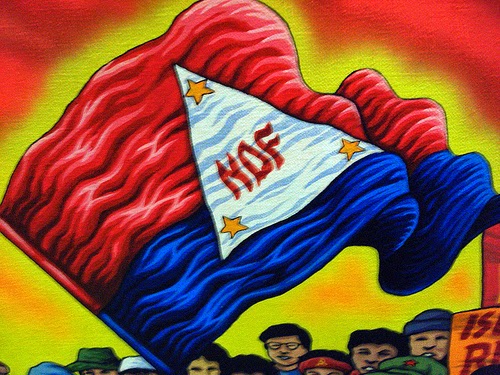 MEDIA RELEASE
By Communist Party of the Philippines
27 May 2014

The Communist Party of the Philippines (CPP) condemns the 22 May coup d’état in Thailand led by Army chief Gen. Prayuth Chan-ocha. The CPP condemns the imposition of military rule, the monopolization of political power and the suspension of civil and political rights. The CPP urges the toiling masses of Thailand to wage revolutionary resistance to overthrow the military junta and build their democratic mass organizations.

The CPP condemns widespread violations of human rights under the Thai military rule. The military junta has employed army soldiers to suppress demonstrations, arrest protest leaders and ordinary people and detain government and political leaders. It has censored or shutdown television and radio broadcast operations and newspapers. It has set its sights against social media users who speak against the military junta.

The coup follows months of intense political crisis in the the ruling system of Thailand. It has seen sustained mass demonstrations since November leading to the abolition of the parliament, failed elections and the dismissal of the prime minister.

Protests were initially sparked by opposition to the attempts of the Yingluck Shinawatra government to push for an amnesty law that would pave the way for the political rehabilitation of his brother Thaksin Shinawatra. Thaksin Shinawatra is a former Thai prime minister deposed in 2006 after corruption charges for not paying taxes in the sale of his telecommunication company sparked massive demonstrations. He presently resides in Dubai.

Protest demonstrations further snowballed in the following months with demands against corruption and nepotism against the ruling Shinawatra clique. Leaders of the anti-Shinawatra political opposition have taken advantage of the crisis to put forward their demand setup a national council that will give them a bigger role in the Thai government. Counter-demonstrations have been organized by the government. Violent attacks against either side have resulted in scores of demonstrators killed in the succeeding months.

The political crisis in Thailand is a reflection of the intense struggle between the rival factions of the ruling clique amid continuing crisis of the ruling semicolonial and semifeudal system. Although mass demonstrations have been organized by ruling elite parties and dubbed as “Yellow shirts” (led by the anti-Shinawatra Democratic Party) and “Red shirts” (led by the pro-Shinawatra Pheu Thai party), these largely reflect the widespread disenchantment among the broad masses of the people over the political and socio-economic situation in Thailand.

The toiling masses of Thailand have long been protesting against corruption, low wages, suppression of workers rights, rising costs of living, landlessness, rural poverty and so on. The ruling elite parties have bannered one or several issues in order to advance their political agenda, but not necessarily the overall democratic aspirations of the Thai people.

The leaders of the military junta describe its rule as an attempt to resolve the political crisis in Thailand. In truth, the imposition of martial law is only part of the worsening crisis of the ruling political system in the country. In the end, the martial law regime will only succeed in further inciting the people to wage mass struggles to advance their democratic aspirations.

The CPP calls on the Thai people to wage mass struggles in order to advance their democratic, progressive and anti-imperialist aspirations. The toiling masses must develop their own independent political force by building their own revolutionary party and mass organizations.

The Filipino people and their revolutionary forces are in solidarity with the Thai people in their struggle to put an end to the military junta and to advance their democratic aspirations. Like the Thai people, the Filipino people are confronting a corrupt, brutal, puppet and mendacious regime and are waging an all-out struggle to oust the US-Aquino regime.
Posted by nickglais on 5/28/2014 03:00:00 AM